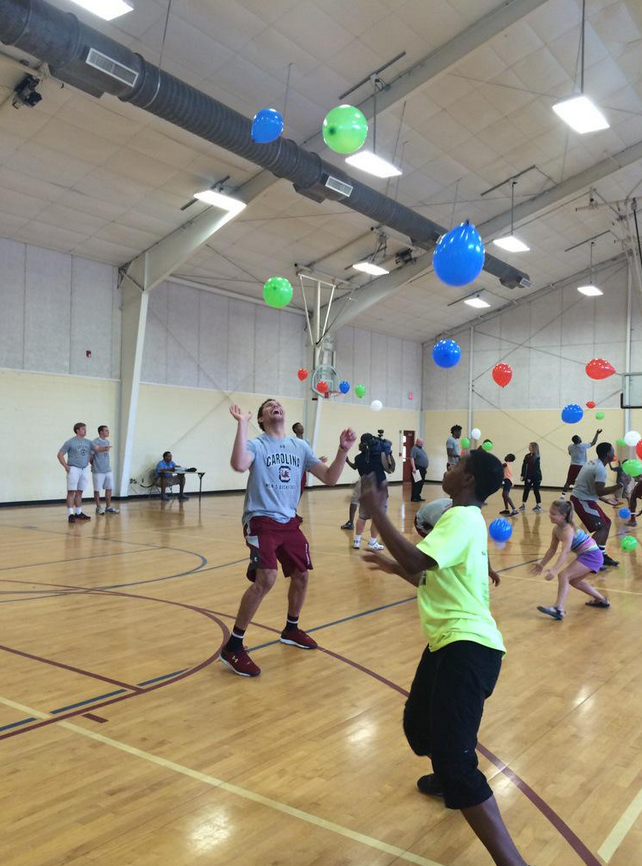 COLUMBIA, S.C. (USC SID) — The South Carolina men’s basketball team had a fun-filled day of games at the Greenview Park gymnasium Friday afternoon, playing with an energetic group of area children from My Brother’s Keeper on the final day of its 8K in 8 Days event. The Gamecocks got their competitive juices flowing with “Minute to Win It” style games, pairing with kids from the crowd to square off against one another. The day’s events included a ping pong ball toss, keeping a handful of balloons afloat and one-handed sorting races, among others. To cap it all off, freshman guard P.J. Dozier answered the challenge to a dance-off (and lost) and the team signed autographs for the kids It helped to teach important teamwork lessons to not just the students from area elementary schools, but for the Gamecocks as well. “It’s fun for me to come out here with the kids and play,” said junior guard Sindarius Thornwell, a native of Lancaster. “I feel like everybody has been enjoying the week being out here in the community. Even though it’s new to the freshmen, they always come back talking to me about it and how much they’ve had fun. That’s what it’s all about, reaching out to the kids and the community and having fun.” After the team arrived, the group heard from former Gamecock Carey Rich as well as Columbia Mayor Steve Benjamin. “These young men recognize the responsibility of leadership that they have, to come and share their time with our young people,” Mayor Benjamin said after addressing the crowd. “These kids are so excited by it. It does your heart good and it helps you realize that these young people are so well rounded, they have gifts and they’re willing to share them. It makes our community a better place.” Season ticket prices for the upcoming season remain unchanged, with full season packages starting at $90. Like last season, fans can purchase lower level season tickets for $260 (Gamecock Club membership required for sections 104-106, 113-115), the Coke Family Sections are available for $600 (four tickets) and upper level tickets are available for $200 (no Gamecock Club membership required). End zone seating in the upper level is priced at four seats for $360. University Faculty/Staff members receive a 20% discount on lower level and upper level ticket prices. Gamecock fans who have already renewed their season tickets for the 2015-16 campaign and those fans who purchase new or renew their season tickets during the “8K in 8 Days” campaign, are eligible to win a prize each day of the initiative. Prizes include a game-worn jersey, an autographed basketball, a $100 gift card to the GamecocksOnline.com online store, a game day VIP experience, and a trip with the team for an away game. To place a deposit for season tickets, fans are encouraged to visit Gamecocksonline.com/Tickets, or call 1-800-4SC-FANS.

South Carolina maintains hold on No. 1 in AP poll