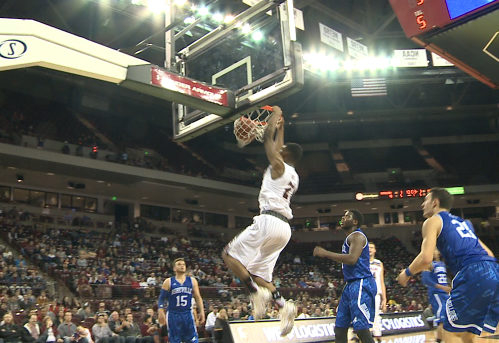 COLUMBIA, S.C. (USC SID) — The South Carolina men’s basketball team was one of over 175 colleges and university programs honored by the National Association of Basketball Coaches (NABC) on Wednesday, when the squad was honored with the Team Academic Excellence Award for their achievements in the classroom for the 2014-15 school year. Institutions who earn the award must hold a cumulative grade point average (GPA) of a 3.0 or above. South Carolina posted a team GPA of 3.164 for the academic year. The Gamecocks were the only SEC team on the Team Academic Excellence Award list. “I’m proud to announce that our team is being honored by the NABC for maintaining a team GPA above a 3.0,” head coach Frank Martin said. “It’s our fifth-consecutive semester above a 3.0 and I’m proud that we have a group of guys that are fully committed to the whole student experience while playing basketball at the University of South Carolina.” The 2014-15 NABC Honors Court, recognizing individual men’s collegiate student-athletes for academic excellence, will be released on Thursday.