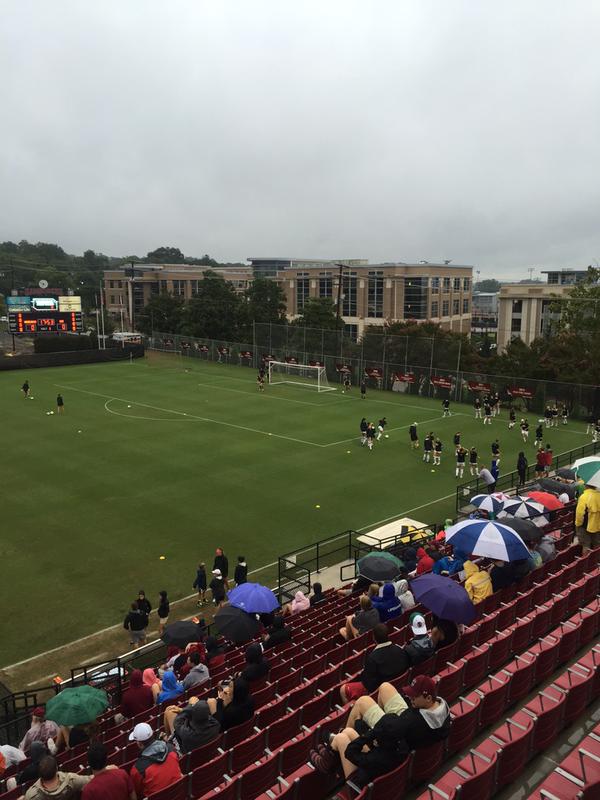 COLUMBIA, S.C. (USC SID) — South Carolina junior forward Sophie Groff registered a pair of goals for the No. 8 Gamecocks, who held off a late rally to defeat Coastal Carolina, 3-2, on Sunday night at Stone Stadium. With the victory, South Carolina improved to 3-1 overall this season, while the Chanticleers fell to 2-2. Both of Groff‘s goals came in the second half, starting in the 53rd minute. A miscue by the Coastal Carolina backline left the ball with Groff, who eventually found the back of the net after her initial shot was blocked. The scoring play marked the first goal of the season for the junior and gave the Gamecocks a 2-0 lead. Groff pushed the South Carolina advantage to three less than 10 minutes later following a counter attack by the Gamecocks. Sophomore forward Savannah McCaskill streaked into the right side of the box and slipped a pass across the box to Groff, who deflected the pass into the corner of the net. After a flurry of early corner kicks, South Carolina opened the scoring on Kaleigh Kurtz‘s first career goal in the 25th minute. Junior midfielder Chelsea Drennan sent a corner kick into Kurtz, who connected with the ball at the top of the 8-yard box, sending a shot over the outstretched arms of Coastal Carolina keeper Becca Austin. The Chanticleers closed the gap in a hurry down the stretch, scoring twice in the final 18 minutes. Daniella Famili beat South Carolina goalkeeper Abbey Crider from the top of the box in the 72nd minute to make it 3-1, and Sam Patterson‘s goal off a corner kick cut the Coastal Carolina deficit to just one with less than four minutes remaining. Coastal Carolina‘s rally fell short, as it failed to convert on its following corner kick before the Gamecocks gained possession and ran the clock out. The Coastal Carolina offense was kept in check for much of the first half, managing just three shots in the first 45 minutes. The Gamecocks tallied 14 first half shots, putting seven on target. South Carolina finished the match with a 24-8 shot advantage. GAME CHANGER Groff‘s second goal of the night off the counterattack gave the Gamecocks a comfortable 3-0 advantage with less than 30 minutes left in the match. KEY STAT After recording just three corner kicks against Clemson on Friday, the Gamecocks tallied 9 set pieces from the corner on Sunday. NOTABLES one space· South Carolina‘s 24 shots on Sunday against Coastal Carolina marked a season-high. one space· Groff‘s performance was the second career multi-goal game for the junior forward. one space· The Gamecocks have averaged three goals per match through three home games this season. Seven of their nine goals at home in 2015 have come after halftime. one space· Sophomore Abbey Crider earned her fifth career start in net for the Gamecocks on Sunday. She finished with one save on the way to her second career victory. UP NEXT South Carolina resumes its home schedule on Friday (Sept. 4) when it hosts Colgate at Stone Stadium. Kick-off is set for 7 p.m. ET.