Williams Has Small Fracture in Neck 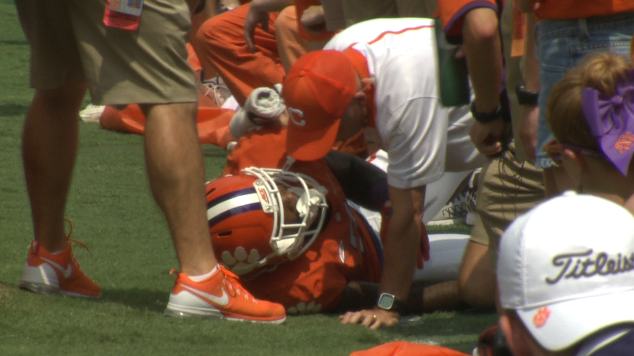 Clemson, S.C. (CU SID) — Clemson junior wide receiver Mike Williams sustained a small fracture in his neck during the Tigers 49-10 victory over Wofford on Saturday. Head Coach Dabo Swinney said on Sunday that it is not known how long Williams will be out and he could miss the entire season. “We received the results from the MRI and he has a small fracture,” said Swinney. “Mike is doing well, he can walk and will be at class tomorrow. He will wear a brace and will be reevaluated again in about six weeks. I can‘t say how long he will be out. He might not be able to play the rest of this year. We will just have to see how it heals. “We are very thankful that the overall prognosis is good that he will be able to play again at some point. I can‘t say enough about our medical staff. They did a great job through the entire process.” Williams was injured in the first quarter while making a four-yard touchdown catch on a pass from Deshaun Watson in the East end zone of Memorial Stadium. After making the reception near the end line he crashed into the padded goal post and went to the ground. The native of Vance, S.C. and Lake Marion High School led Clemson in receiving yardage last year with 1,030 yards on 57 receptions and six touchdowns. He ranked seventh in the nation in yards per reception (18.1), given a minimum of 50 receptions. He was a preseason first-team All-ACC selection by the Atlantic Coast Conference Media. “Mike is hard to replace because of his experience and his talent,” said Swinney. “But we cross train receivers and it will give other talented players an opportunity.” Swinney indicated that Charone Peake, a starter at a different receiver position, would move to the receiver position Williams normally plays and that Germone Hopper could move into a starting receiver role. Sophomore Artavis Scott is the third starter in Clemson‘s three wide receiver set. The movement in the lineup will give freshmen Ray-Ray McCloud, Deon Cain, Trevion Thompson and Hunter Renfrow more opportunities as well. McCloud led Clemson with eight receptions for 80 yards in the victory over Wofford, the most receptions in Clemson history for a freshman in his first game.