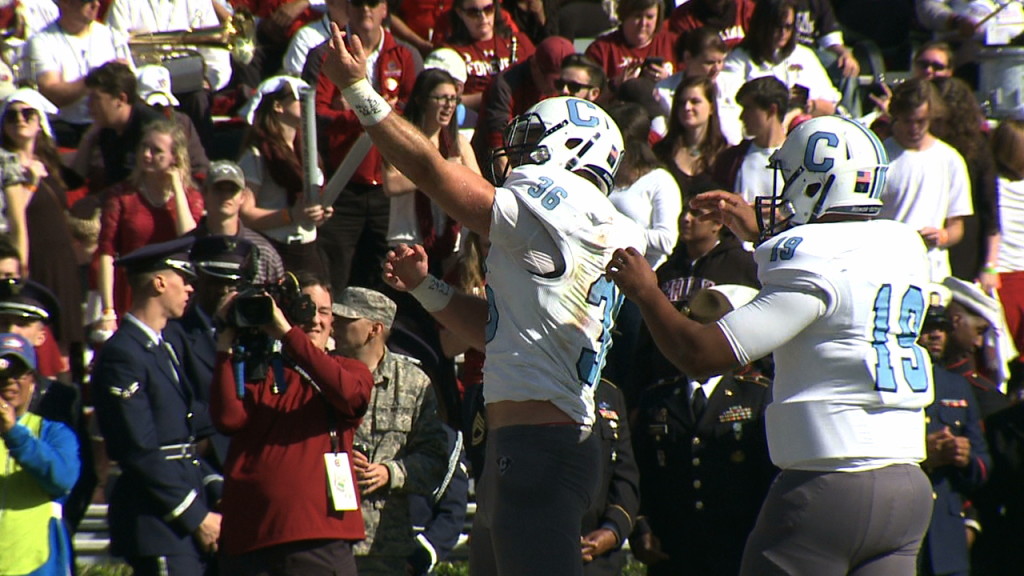 COLUMBIA, S.C. (AP) — Tyler Renew scored the winning touchdown with a 56-yard run up the middle as lower division The Citadel shocked South Carolina 23-22 on Saturday. The Gamecocks (3-8) hadn’t lost to an FCS team in 25 years. The Bulldogs (8-3) beat them back then too in 1990. The Citadel stuck to its triple option attack even as it sputtered in the middle of the game. Facing a third-and-1 with just over six minutes to go, the Gamecocks defense overcommitted and Renew scampered for the touchdown. South Carolina appeared to pull it out on a miracle 94-yard fourth down touchdown to Pharoh Cooper with 44 seconds left. But the officials called a false start, saying all the Gamecocks weren’t set. It was the first win for an FCS team over an SEC team since Jacksonville State beat Mississippi 49-48 in two overtimes in 2010. Renew, a former Ben Lippen High School standout and Columbia native, said this week he had fond memories of selling peanuts at South Carolina home games at Williams-Brice Stadium. Now he can tell people how he ran for 174 yards and two touchdowns on 23 carries against South Carolina as the Bulldogs snapped a 28-game losing skid against Football Bowl Subdivision teams. Cam Jackson ran 12 times for 106 yards, including a 59-yard touchdown on the Bulldogs first drive to set the tone that The Citadel would not back down. When the final second ticked off, the Bulldogs ran all over the field before heading to the corner where their light blue-clad fans gathered. Any fans wanting to snap a picture of the score had to be quick. The scoreboard operator wiped it off within seconds of the final gun. The Citadel defense and special teams had its moments too. South Carolina appeared rolling to take back the lead when Joe Crochet and Mark Thomas stopped David Williams for no gain on a fourth-and-1 with four minutes to go. Aron Span III downed a punt at the South Carolina 3 to put the Gamecocks in a hole for their final drive. Eric Goins also kicked a career long 48-yard field goal to give the Bulldogs a 17-16 lead in the fourth quarter. Cooper tried to rescue his team with 11 catches for 191 yards. Perry Orth was 28-of-43 for 367 yards, and tight end Jerell Adams had a career-best six catches for 105 yards. But the Gamecocks struggled to get in the end zone and settled for three field goals from Elliott Fry.