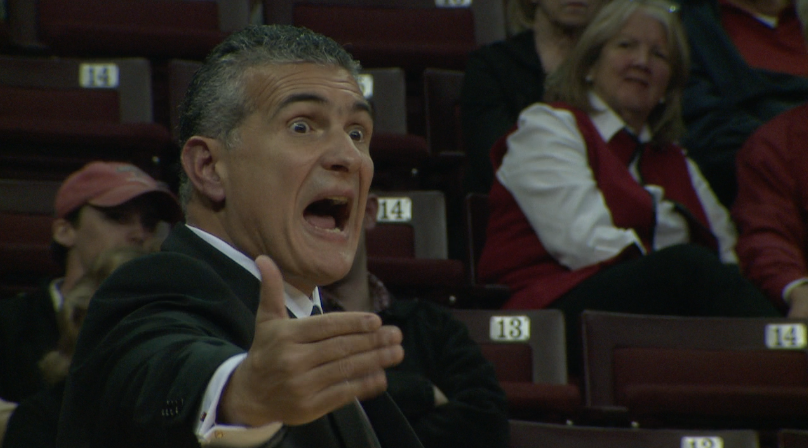 ST. THOMAS, USVI — South Carolina advanced in the winner’s bracket and into the second round of the Paradise Jam and will face Hofstra on Sunday night at the UVI Sports and Fitness Center. The Gamecocks own a 5-0 all-time record vs. the Pride, having last met during the 1981-82 campaign. GAME STORYLINES – South Carolina is in its 108th season of varsity basketball in 2015-16. – Carolina is led by fourth-year head coach Frank Martin. Alongside him are associate head coach Matt Figger, assistant coaches Perry Clark and Lamont Evans and director of men’s hoops operations, Andy Assaley. – Sunday’s matchup vs. Hofstra marks the fourth game in nine days for the Gamecocks. – Led by a career high 23 points from senior forward Mindaugas Kacinas, South Carolina posted a 76-61 win over DePaul in the opening round of the Paradise Jam on Friday. Kacinas scored 14 in the first half, and finished the game hitting 10-of-15 from the free throw line, also career highs. Junior guard Sindarius Thornwell collected the fourth double-double of his career with 10 points and a game best 10 rebounds. Carolina held the Blue Demons to just 36.5 percent from the floor, and just 21.4 percent from 3. – The Gamecocks held a 33-30 halftime lead against Oral Roberts on Nov. 16, but 19 second-half points from senior forward Laimonas Chatkevicius fueled a 51-36 Gamecock advantage in the second stanza, which resulted in an 84-66 victory for the home team. Chatkevicius finished with a career high 27, while fellow senior Mindaugas Kacinas notched his fourth-career double-double with 12 points and a game high 13 rebounds. – The Gamecocks committed just six turnovers vs. the Golden Eagles, tied for the fewest during Frank Martin’s time as head coach at Carolina. – South Carolina is 8-3 during Martin’s tenure in destination tournaments, posting a 4-0 mark at the Hoops For Hope Classic in Puerto Vallarta, Mexico in 2012, a 2-1 mark at the 2013 Hawaiian Airlines Diamond Head Classic, a 1-2 record at the 2014 Charleston Classic, and thus far a 1-0 mark at the Paradise Jam – The Gamecocks return at least 72 percent of their stats in all major categories, including returning five of their top six scorers, with junior guard Duane Notice’s 11.7 points per outing in 2014-15 leading the pack. SCOUTING HOFSTRA Hofstra enters Sunday’s matchup with a 3-0 record after upsetting Florida State, 82-77, in the Paradise Jam opening round on Friday. Four recorded double-figures against FSU, led by junior guard Brian Bernardi’s 24 points. He hit six 3s in the contest, with five of those in the first half. The Pride hit 46.6 percent from the floor vs. Florida State, holding the Seminoles to just 39.7 percent. Five Hofstra players average double-figures on the young season, with Bernardi’s 19.0 leading the group. Juan’ya Green (16.7), Ameen Tanksley (14.3), Denton Koon (13.3) and Rokas Gustys (11.0) all contribute double-figures as well. Gustys leads the squad and ranks among national leaders with 12.3 rebounds per outing and Green dishes 8.7 assists per game against just nine turnovers. Gustys pulled down 11 rebounds vs. the Seminoles. Hofstra is led by head coach Joe Mihalich in his third season. KACINAS SHINES VS. DEPAUL Senior forward Mindaugas Kacinas posted the first 20-point game of his career with a team best 23 vs. DePaul on Friday in the Paradise Jam first round. Kacinas’ previous career best was an 18-point effort vs. Rider during his rookie season in 2012. Kacinas has always been a steady performer on both ends of the floor for the Gamecocks, and is consistently the team’s top offensive rebounding threat. To date, Kacinas averages career-best marks of 14.3 points and 7.3 rebounds per game. BY THE NUMBERS 2-2 – Junior guard Duane Notice was a perfect 2-of-2 from 3-point range vs. DePaul, and is now 9-of-15 from beyond the arc this season, a team leading 60.0 percent. That mark ranks third in the SEC. 2 – Rookie guard PJ Dozier collected two steals vs. the Blue Demons. He has collected at least one steal in each game this season, including a high of three vs. Norfolk State. 18.0 – South Carolina leads the SEC with 18.0 offensive rebounds per game and Kacinas ranks third in the league with 4.3 offensive boards per outing. +5.0 – South Carolina ranks second in the SEC with a turnover margin of +5.0. 13 – Senior forward Mindaugas Kacinas collected 13 rebounds in the matchup vs. Oral Roberts. It was just one shy of matching his career high, which he set in the 2013-14 opener vs. Longwood. In each of his four seasons in the Garnet and Black, Kacinas has had a double-figure rebounding game in either the first or second game of the season. 6 – The Gamecocks committed just six turnovers in the contest vs. Oral Roberts. Since committing 26 turnovers in the exhibition – the Gamecocks cut that in half vs. Norfolk State in the opener with just 13, and most recently just six vs. Oral Roberts.