Fireflies shut out Hagerstown in series-opener 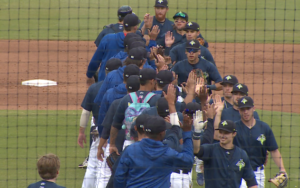 HAGERSTOWN, MD – The easy-going right-handed starter Nicholas Debora looked his sharpest on the mound on Wednesday. Columbia’s hurler tossed seven scoreless innings, scattered three hits and led the Fireflies to a 5-0 series-opening victory over Hagerstown at Municipal Stadium. It was Columbia’s fourth shut-out win in 2018.

In just his second start as a Firefly, Debora (W, 2-2) was delightful. The 24-year-old had a great command of all his pitches and wound up striking out five Suns batters. Debora only allowed five hitters to reach base, two of which in his final frame on the mound. RightyConner O’Neil finished the job with two more scoreless innings. O’Neil has been nearly untouchable over the last two months. Since May 12, the Kennewick, Washington, native has surrendered just one run (12 appearances, 16 IP).

Paulino became the third Firefly in 2018 to homer twice in a game (Jeremy Vasquez on July 7 and Quinn Brodey on April 18).

Top 1 – Scott Manea doubles in Matt Winaker (who began the inning with a triple himself). COL 1, HAG 0

Top 3 – Quinn Brodey doubles in two runs…Manea doubled earlier in the inning, his second of the night (and his sixth in eight games in the month of July). COL 4, HAG 0

Top 6 –Paulino goes yard for the second time on the Wednesday…becomes the third 2018 Firefly to homer twice in a game (Brodey, Jeremy Vasquez). COL 5, HAG 0

The second game of the three-game set is scheduled for 7:05 ET on Thursday from Municipal Stadium. The Fireflies send right-hander Tony Dibrell(3-4, 3.59) to the mound to face off against Suns righty Andrew Lee (2-2, 5.00).

You can listen to the action on FOX Sports Radio 1400 AM, ColumbiaFireflies.com and the iHeartRadio Radio app starting at 6:45 p.m.