Gamecocks’ Wilson named unanimous pick for Rookie of the Year 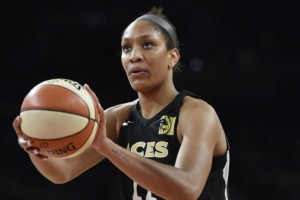 A’ja Wilson’s history of picking up honors has followed her from her collegiate career at Carolina to her first year in the WNBA.

The first overall pick of the Las Vegas Aces was a unanimous selection for the WNBA’s Rookie of the Year honor, voted as the pick by all 39 members of a national media body.

“It means a lot with that rookie class,” Wilson said. “There are so many great players.”

She had the second-highest scoring average for a rookie in league history, trailing only Seimone Augustus’ 21.9 points in 2006.

Wilson is the second consecutive former Gamecock to win the award. Allisha Gray of Dallas won it last season.

“Everyone in America knows she was rookie of the year,” Wilson’s former coach Dawn Staley said.

Wilson scored in double figures in every game and had the Aces in the hunt for a playoff berth until the final weekend of the season.

She is currently playing with the U.S. national team and is in the mix to make the World Cup team.

Wilson headlined the league’s All-Rookie team. She was joined by Ariel Atkins of Washington and Diamond DeShields of Chicago, who were both unanimous choices as well. Azura Stevens of Dallas and Kelsey Mitchell of Indiana rounded out the team.

The Associated Press contributed to this article.