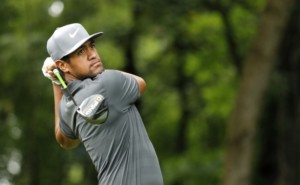 NEWTON SQUARE, Pa. – Tony Finau was announced as the final captain’s pick, selected to represent the U.S. in the 2018 Ryder Cup by Jim Furyk.

Aiken’s Kevin Kisner was in consideration for the last spot, but the former Georgia Bulldog did not qualify for one of the eight automatic spots awarded earlier in the season, nor selected with any of the final four captain’s selections.

“There won’t be any locker room noise with me,” Finau said Monday. “I can play with anyone. I feel that my personality is just that way. I can bring the best out of different guys playing with them, and them the same to me. I’m pretty easy to play with. And I’m playing some good golf, some world-class golf.”

His appeal is that he makes a lot of birdies, which is critical in match play. He was paired with Furyk the first two days at the PGA Championship, and struggled in the opening round before he tied a championship record by making 10 birdies in the second round.

“He has an unbelievable body of work this year,” Furyk said. “All those top-10 finishes, the play in big championships and the majors, and then his current form, a second, a fourth and an eighth in the playoffs. He checked a lot of boxes and made it impossible not to pick him.”

Eight automatic qualifiers were set after the PGA Championship, so the start of the FedEx Cup playoffs was effectively an audition. After his top-5 finishes in the first two events, Finau shot a final-round 65 on Monday to tie for eighth at the BMW Championship while Xander Schauffele, making a late run at a pick, finished one shot out of a playoff.

The eight Americans who qualified on their own were Brooks Koepka, Dustin Johnson, Jordan Spieth, Justin Thomas, Rickie Fowler, Bubba Watson, Webb Simpson and Patrick Reed. Throw in Woods and Mickelson, and that gives the U.S. team a lineup that has combined for 31 majors.

That doesn’t mean as much in foursomes and fourballs, on a European course before the singing and chanting of Europeans fans.

Finau, who turns 29 on Thursday, was invited by Furyk to play as part of a small group at Le Golf National on the weekend before the British Open. Finau, who has one career PGA Tour victory, said he was ready for the pressure of the Ryder Cup.

“I never thought I was on that team until I got that call,” he said. “I made sure I played that way; I played like I always had something to prove. And I let the guys on the team know that I’d be a great pick and I’d be ready to go. It’s definitely cool to accomplish something like this and to be able to play as well as I have under the circumstances, it’s something I’m extremely proud of.”

The Associated Press contributed to this article.