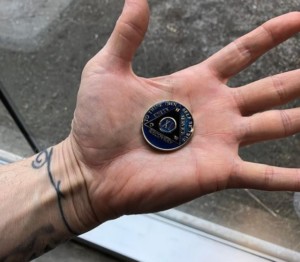 The real Slim Shady is 11 years sober and commemorated the occasion by posting a picture of a sobriety coin to Twitter and Instagram.

Eminem posted a similar picture last year while he was at Coachella.

The Detroit rapper has been public about his battle with prescription drug addiction.

“It’s no secret I had a drug problem,” he told Vibe magazine in 2009. “If I was to give you a number of Vicodin I would actually take in a day? Anywhere between 10 to 20. Valium, Ambien, the numbers got so high I don’t even know what I was taking.”

Eminem went to rehab in 2005 to get treatment for his addiction to sleeping pills. But in 2007, he spiraled out of control again and was hospitalized for a methadone overdose.

It wasn’t until 2008 that Eminem decided he wasn’t about to lose himself to drugs. According to the New York Times, he checked himself into rehab early that year and started the full 12-step program of a recovering addict.

His albums “Relapse” and “Recovery” deal with his addiction and his comeback.