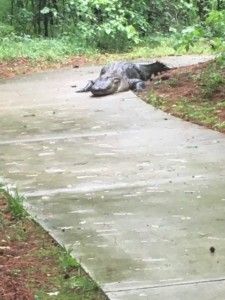 Cayce, S.C. (WOLO)–Some folks in the Midlands had an unexpected encounter on Mothers Day.
Don Vargo sent ABC Columbia News this picture of an alligator he says he saw on the south trail along the Congaree Creek in Cayce.
He says the gator was between eight and ten feet long.
Officials with the Department of Natural Resources say this is the typical size of an adult male alligator and because it is mating season they are on the move.
Officials say if you see one, just leave it alone.