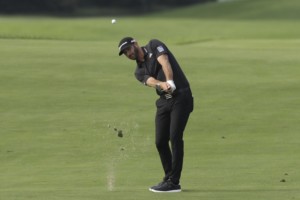 JERSEY CITY, N.J. (AP) — Dustin Johnson is hitting the ball so well he doesn’t have to make every putt. He made enough birdies Friday for a 4-under 67 that gave him a one-shot lead in The Northern Trust.

Johnson holed an 8-foot putt on the 18th at Liberty National to take the lead going into the weekend of the FedEx Cup playoffs opener, a tournament he has won twice at other courses.

Spieth began the PGA Tour postseason not assured of advancing beyond the first event. He had a 64 and is one round away from having a chance to end a two-year victory drought.

Rory McIlroy had a 68 and was three shots behind, which was better than five. He originally was assessed a two-shot penalty in the bunker until it was rescinded based on intent.

Tiger Woods withdrew before his round started with a mild oblique strain.