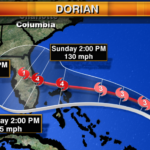 MIAMI (AP) –  President Donald Trump has declared an emergency in the state of Florida as it braces for the brunt of Hurricane Dorian.

In issuing the emergency declaration, Trump has ordered federal assistance to supplement state and local efforts responding to Dorian.

The Hurricane Center says slow movement by the storm as it hits Florida would put parts of the state “at an increasing risk of a prolonged, drawn-out event of strong winds, dangerous storm surge and heavy rainfall.”