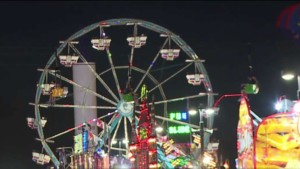 Columbia, SC (WOLO) — the South Carolina State has only been open for one day, and according to  state fair officials,  the first day of the 150th anniversary opened to ” near record setting” revelers eager to check out all of the new features on display this year.

Fair officials, tell ABC Columbia News, 39,416 visitors stopped by the midway to welcome in a new year of festival fun for opening day Wednesday October 9th, 2019. That’s double the amount of people that turned out for the first day of the fair last year, and just shy of the 2 thousand visitors that broke a record for an opening day back in 2014.

“This was an exciting start to our special anniversary event,” said State Fair manager, Nancy Smith. “We are thrilled that so many people came out to help us launch this very special birthday, and we are anticipating another great year.”

Wednesday, the fair held their special $1 gate promotion, allowing guests to enjoy a variety of the new attractions across the midway this year. While the traditional favorites were still available guests also lined up  to check out all of the new things the SC State fair had to offer as well, including a free daily CIRCUS at the Fair. Smith says, for the opening day,  the circus performed to near capacity crowds in the 1,300-seat arena during all three performances.

You still have plenty of time to check out all of the sights and sounds of the South Carolina State Fair which continues through October 20th, 2019 at Rosewood Drive and George Rogers Boulevard.  There is no increase in ticket prices this year. The fair gates open at 11 a.m. Thursday.

“We are so grateful for 150 years of support from our community, and we hope the whole state will come and celebrate with us” .