Tulsa, OK ( KJRA(ABC)/CNN) — The holidays are suppose to be a time spent with family and friends, making memories and reflecting on those of the past. But for some, it can be a very lonely season.

While searching Craigslist, Carson Carlock found something that caught his attention, and touched his heart.

It was a post that asked: “Anybody need a grandma for Christmas?”

“She said, ‘I cook, and I’ll cook dinner. I’ll even bring gifts for the kids. I just don’t want to be alone because it hurts,’” Carlock said. The post ended with the plea: “Let me be a part of your family.” 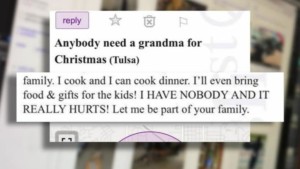 It tore at Carlock’s heart, because his mom who died last year spent her last Christmas alone. She was diagnosed with Stage 4 cancer and was too sick to travel for the holidays.

He saw the Craigslist post as a way to honor her memory.

“She would want me to be the kind of person to do this for other people,” he said.

Still, not everyone saw the post the way Carlock did.

“A lot of people started sending her hateful messages,” he said. “I understand that everybody can be wary about it, because there’s a lot of bad things happening in the world right now.”

Soon, the post was deleted, but not before the “grandma” issued a parting shot, thanking everyone for the “extra shot of pain.”

That’s when Carson decided to act.

“I don’t want anyone else to feel that way,” he said.

Carlock made his own Craigslist ad, asking the “grandma needing a family” to reach out, so he could help her have a wonderful Christmas.

The post went viral. It was shared thousands of times.

“I just want you to know that you aren’t alone,” he said. “If you find yourself wanting to be a part of a family on Christmas, just reach out.”

Carlock calls her “Grandma Carrie.” and then posted this heartwarming message on his Facebook page saying,

“Carrie is the most loving and sweet person, I wish I could share with you more about her but she has asked to keep it private,” he said on Facebook. “She is so wonderful and I will be seeing her Christmas Day. Thank you guys so much for your support and love. Merry Christmas guys!”