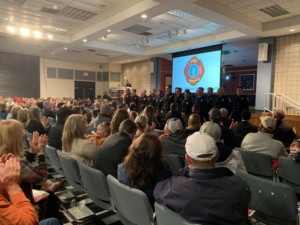 Each of the 20 recruits were badged by Chief Jenkins during the ceremony that was held on the South Carolina Fire Academy campus in front of a packed audience full of family members and friends.

Chief Aubrey Jenkins released a statement in reference to the graduation saying,

“This was a moment that I look forward to with each and every recruit class that completes our 18-week academy,” Chief Jenkins said, “Each of these new firefighters has demonstrated that they have a true desire to serve and protect the public. The badges they have earned today will now be a permanent reminder of the strong conviction they’ve shown during their training. I look forward to seeing them grow into their professions as they begin service with our department.”

The new recruits will gear up for their first shifts this Saturday.