Did you see a host of black boxes on social media Tuesday? Here's why.

Columbia, SC (WOLO) — If you were scrolling through the social media site Instagram Tuesday and encountered a sea of blacked out squares, there was a reason you weren’t seeing things pictures.

Some users joined a growing number of people in the entertainment industry that said they could no longer sit by an talk about their artists when there was ongoing protests demanding a change surrounding police brutality.

The hashtag, #THESHOWMUSTBEPAUSED movement was started by two longtime music veterans who wrote on social media that the move was a

‘call to action for those of us who work in music/entertainment/show business to pause on Tuesday June 2nd because the show can’t just go on as our people are being hunted and killed.”

The two say there hope was to visibly show solidarity with the nlack community during the current unrest.

We are tired and can’t change things alone. This is a call to action for those of us who work in music/entertainment/show business to pause on Tuesday, June 2nd because the show can’t just go on as our people are being hunted and killed. Use this time on Tuesday to come together and figure out how we can hold our partners, colleagues and companies alike, accountable to come up with and execute a plan that actively supports and protects the VERY CULTURE that it profits from. #THESHOWMUSTBEPAUSED

A post shared by Bri Anna (@bri_anna) on pushed back saying agree however. One artist posting that he believes the ‘black out’ is a waste of time and space where more meaningful discussions could be had.

Not everyone in the music world agreed. One artist saying the ‘blackout’ was a waste of space that could be used to ‘spread info and be loud as ever’. 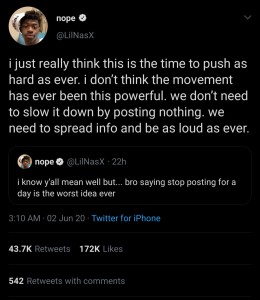 A recap of round one of the NBA draft