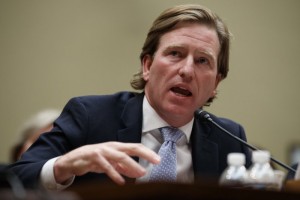 FILE – In this May 22, 2019 file photo, Department of Homeland Security Cybersecurity and Infrastructure Security Agency Director Christopher Krebs testifies on Capitol Hill in Washington. “I have confidence that your vote is secure, that state and local election officials across this country are working day in and day out, 24/7, that the 2020 election is as secure as possible,” Krebs said. (AP Photo/Carolyn Kaster, File)

WASHINGTON (AP) — President Donald Trump on Tuesday fired the director of the federal agency that vouched for the reliability of the 2020 election.

Trump fired Christopher Krebs in a tweet, saying his recent statement defending the security of the election was “highly inaccurate.”

The firing of Krebs, a Trump appointee and director of the Cybersecurity and Infrastructure Security Agency, comes as Trump is refusing to recognize the victory of Democratic President-elect Joe Biden and removing high-level officials seen as insufficiently loyal. He fired Defense Secretary Mark Esper on Nov. 9, part of a broader shakeup that put Trump loyalists in senior Pentagon positions.