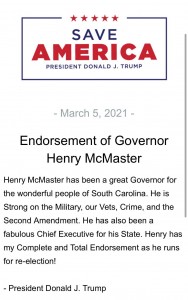 The move continues the years long alliance between the two leaders and aims to strengthen Trump’s ties with the early-voting state he won twice. Trump’s statement commended McMaster’s efforts on behalf of the military, veterans and law enforcement.

The former president wrote that the Republican governor “has my Complete and Total Endorsement as he runs for re-election!”

The move signals Trump’s desire to maintain ties with South Carolina, home of the first presidential primary votes in the South. Earlier this week, he endorsed U.S. Sen. Tim Scott in his 2022 reelection bid.