COLUMBIA, S.C. — After losing most of the depth at the guard position, South Carolina has added yet another transfer to help restock the cupboard in Columbia.

Washington junior Erik Stevenson announced on his Instagram page that he will be transferring and playing for the Gamecocks next season. 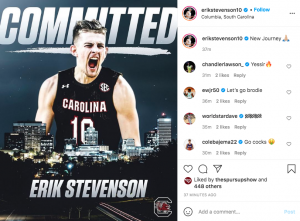 The 6-foot-3 guard saw action in all 26 games for Washington last season, earning the start in 23 of them.

He had 12 games scoring in double figures, including a 27-point performance against California in January.

Prior to last season at Washington, Stevenson played the previous two seasons at Wichita State. He led the Shockers in scoring (11.1 ppg) in the 2019-20 season as a sophomore.

The Gamecocks have lost nearly all of their depth at guard in the past two weeks. Junior A.J. Lawson will likely take his talents to the professional levels, while Keyshawn Bryant, Jermaine Couisnard, and Trae Hannibal have all either declared for the NBA Draft or entered the transfer portal.