COLUMBIA (WOLO): A woman has been charged with murder in a fatal stabbing Saturday morning, after officers say she was first detained in connection with the incident. 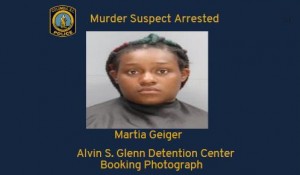 Columbia Police say 25-year-old Martia Geiger is accused of arguing with a man before the fatal stabbing.

Officers say the incident happened on Maybank Street. Deputies were called to the scene around 5:30 a.m.

The Richland County Coroner’s Office will release the victim’s name.