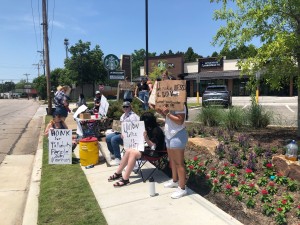 Columbia, S.C. (S.C.)–Some employees at a Midlands Starbucks have gone on strike.
In a statement provided to ABC Columbia, an employee representative says the strike is in response to recent firings at the location over attempts to join a union.
Employees we spoke with say they want to go back to work, but also want to be treated fairly.

Strike Organizer and Starbucks employee Sophie Ryan says, “Its just about maintaining the level of connection we’ve been able to have with all of the people here, with our co-workers, all of that stuff without having this weird, discrimination and retaliation for wanting to do what we love and make enough money doing it.”

ABC Columbia News has reached out to Starbucks for a response.