After 99 days in decline, price for gasoline up a penny

After 99 consecutive days of declining gasoline prices, the cost for a gallon edged a penny higher 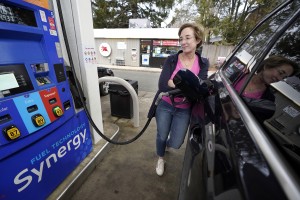 FILE – Jennifer Quinn fills her SUV at a gas station Monday, March 7, 2022, in Needham, Mass. The average price of regular gasoline nationwide is up slightly Wednesday, Sept. 21, from a day earlier, the first time prices have climbed in 99 days. (AP Photo/Steven Senne)

The national average price rose to about $3.68 per gallon, according to the AAA, but prices have been in steady decline. Wednesday’s average is lower than the week-ago average of $3.70 per gallon and well below last month’s average of $3.90 per gallon.

Prices declined for 14 consecutive weeks, the longest streak since 2015, according to energy analysts.

“All streaks have to end at some point, and the national average for a gallon of gas has fallen $1.34 since its peak in mid-June,” said Andrew Gross, AAA spokesperson. “But there are big factors tugging on global oil prices—war, COVID, economic recession, and hurricane season. All this uncertainty could push oil prices higher, likely resulting in slightly higher pump prices.”

Prices soared above $5 per gallon over the summer due to increased travel and the war in Ukraine, adding to financial pressure on families and a creating a potential headache for the Biden administration. While the White House has no role in determining what you pay at the pump, gas prices are always a political issue.

The cost of almost everything has spiked as the global economy emerges from the pandemic, but the price of gasoline is something Americans watched ticking higher daily this year at every corner gas station.

Gasoline prices roughly follow crude and the cost of a gallon peaked in the middle of June as a barrel of crude crossed the $120 barrier. Crude prices have tumbled more than 20% since then and gasoline prices are following along.

There are a number of factors that could keep prices where they are, and potentially send them higher, including the weather.

The hurricane season officially begins in June, but most storms threaten the U.S. from August to October. The National Oceanic and Atmospheric Administration says the likelihood of increased hurricane activity this year is 65%

Parents warned of candy-resembling fentanyl ahead of Halloween

New home sales in the U.S. bounced back in August