Sheriff: ‘No truth’ in HBCU president’s comments on bus stop 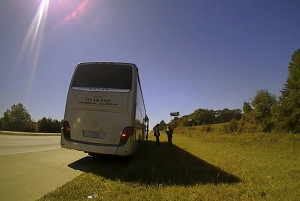 Shaw University President Paulette Dillard wrote she was “outraged” after law enforcement officers in Spartanburg County on Oct. 5 stopped a contract bus transporting students from the historically Black university in Raleigh, North Carolina to a conference in Atlanta.

Spartanburg County Sheriff Chuck Wright emphasized at a Monday morning press conference that police officers stopped the unmarked, “Greyhound-like bus” with tinted windows because it had been swerving. The stop occurred as part of “Operation Rolling Thunder,” the department’s annual weeklong anti-drug campaign in which deputies and officers with agencies from around the state patrol the county’s highways.

Dillard wrote that the scene was reminiscent of the 1950s and ’60s: “armed police, interrogating innocent Black students, conducting searches without probable cause, and blood-thirsty dogs.”

“This behavior of targeting Black students is unacceptable and will not be ignored nor tolerated,” Dillard wrote. “Had the students been White, I doubt this detention and search would have occurred.”

Wright said that a student helped the driver answer officers’ questions and that none of the students were asked to leave the bus. A leashed dog “ran through the baggage,” turning up nothing illegal, according to Wright. Police body camera footage show officers searching several bags in the bus’ underbelly storage. The driver received a warning.

“I wish racism would die the ugly, cruel death it deserves,” Wright said. “If anything we’re ever doing is racist, I want to know it, I want to fix it and I want to never let it happen again. But this case right here has absolutely nothing to do with racism.”

Cherokee County Sheriff Steve Mueller said the officers “didn’t do anything wrong” and could not have known the races of the people inside the bus when they pulled it over.

Mueller added that the leading cause of death in buses and commercial vehicles is driver fatigue. Interestate 85, the highway where officers stopped the bus, is a “deadly corridor,” according to Mueller.

“If my guys see a bus weaving in their lane, and they fail to stop it to check that driver to make sure they’re not too sleepy, then we could have a busload of Shaw students that was involved in a tragic traffic fatality,” Mueller said.

Body camera footage did not show any Shaw University insignia on the contract bus, which had the words “CHAUFFERED TRANSPORTATION” printed on its side. The Shaw University Communications Office did not immediately respond to an email seeking comment.

The traffic stop comes after an April incident in Georgia, where sheriff’s deputies pulled over the Delaware State University women’s lacrosse team bus and searched it for drugs. Tony Allen, the president of the HBCU, said he was “incensed” and accused the law enforcement officers of intimidation and humiliation.

Liberty County Sheriff William Bowman, who is Black, said in May that deputies had found drugs on a different bus that same morning. The team’s chartered bus was stopped because it was traveling in the left lane, a violation of Georgia law, according to Bowman, who said deputies searched the bus after a drug-sniffing dog “alerted” alongside it. No one was arrested or charged and the driver received a warning.

SCHP: Wreck on I-26 East near Exit 91 in Lexington has been cleared