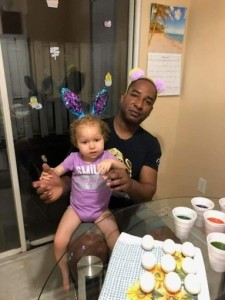 According to an incident report the woman was in “an advanced state of decomposition” when she was found during a welfare check.
Officials say she died from a gunshot wound to the upper body.
Since the woman’s body was found, deputies have been searching for her five year old daughter Aspen Jeter and her father Antar Antonio Jeter.
Deputies say the man and the child may have been spotted in Fayetteville, North Carolina but have yet to be located.

They may be traveling in a blue 2015 Mazda 6 deputies say was taken from the victim’s residence.
If you know where they are, call the Orangeburg County Sheriff’s Office or Crimestoppers at 1-888-CRIME-SC.