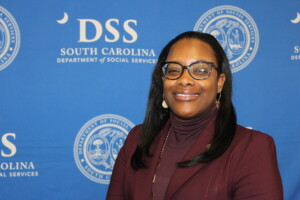 Jones has served as the Spartanburg County Director since 2018 and will continue to on an interim basis until a new director is named.

The Cayce native began her DSS career working as a foster care case manager in Anderson County and later filled the role of foster care supervisor.

Other roles include working as an Upstate Regional Performance Coach in 2016, and joining the Department of Mental Health and Guardian ad Litem Program in 2014.

In a statement Jones says, “As someone who started my career after graduating from college, I have been fortunate to learn and grow so much as a person and leader over the past 16 years. I have truly enjoyed working in Spartanburg and building long-lasting relationships and memories that will not be forgotten. I am excited about transitioning back to Anderson County where it all began and being able to work with an amazing group of professionals and external partners.”

For more information on DSS services available in Anderson County and in SC, please visit the SCDSS website here.