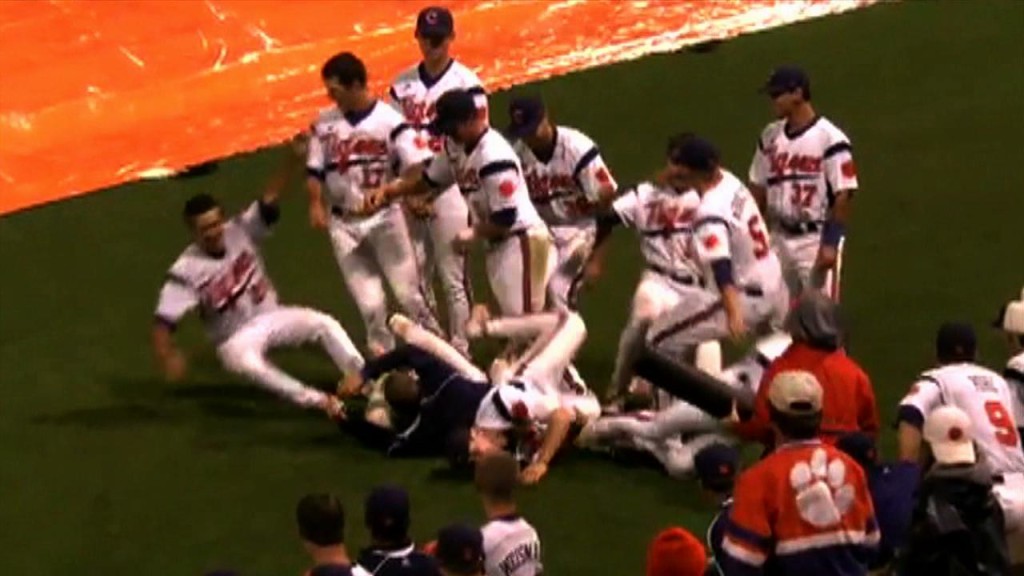 CLEMSON, S.C. (CU SID) — Will Lamb had five of the Tigers’ season-high 23 hits in #15 Clemson’s 19-0 victory over Davidson at Doug Kingsmore Stadium on Tuesday night. In their last regular-season home game, the Tigers improved to 37-16 on the season. The Wildcats ended their season with an 18-30 record. The Tigers put on an offensive show, as Clemson tied its season high for runs and tied a school record with a .523 batting average (23-for-44) in the game. It tied Clemson’s performance against Georgia Southern on March 12, 2002, when the Tigers were also 23-for-44 that day. The Tigers scored at least one run in all eight innings in which they batted as well. Clemson’s five pitchers combined for the team’s sixth shutout of the season. They also allowed just two Wildcats to advance past first base and none advanced past second base. They gave up seven hits (all singles) and two walks with 11 strikeouts as well. Freshman righthander Kevin Pohle (5-1) pitched 5.0 scoreless innings in a starting role to earn the win. He yielded six hits and one walk with four strikeouts. Sophomore righty Kevin Brady made his first appearance since March 6 after suffering an arm injury. Seventy-two days after his last outing, Brady pitched a perfect sixth inning with one strikeout. Lamb pitched a perfect seventh inning with two strikeouts, while Scott Firth and Matt Campbell each pitched a scoreless inning to close out the game. Brian Russell (2-4), the first of seven Davidson pitchers, suffered the loss. He surrendered four hits, three runs, and three walks in 0.2 innings pitched. The Tigers wasted little time taking the game’s first lead in the first inning. John Hinson led off with a single up the middle and Phil Pohl walked. After both runners moved up a base on a steal, Brad Miller grounded out to second to plate Hinson. Lamb followed with a single to right field to score Pohl. After Lamb was caught stealing at second base for out #2, Richie Shaffer walked and advanced to second on a wild pitch. Jeff Schaus then lined a single to center to score Shaffer. During the bottom of the first inning, inclement weather, which had pushed the start time back 83 minutes to 7:53 PM, forced another delay at 8:19 PM that halted play for 127 minutes. Play resumed at 10:26 PM. In the second inning, Miller was hit-by-pitch with two outs and went to third base on Lamb’s single down the left-field line. Shaffer followed with a towering three-run homer to left-center, his eighth long ball of the season. Chris Epps added to Clemson’s lead with a solo homer to right-center in the third inning, his seventh home run of the season. In the fourth inning, Lamb grounded a one-out single through the right side and Shaffer laced a single to left field. Schaus followed with a single up the middle to score Lamb, then Epps belted a triple to right field to score Shaffer and Schaus. Spencer Kieboom lined a single to right field to score Epps. Clemson kept the pressure on in the fifth inning. Steve Wilkerson led off with a single through the left side on a 1-2 pitch and went to third on Lamb’s single through the right side. Pinch-hitter Jon McGibbon drove home Wilkerson with a sacrifice fly to center. In the sixth inning, Mike Dunster drew a one-out walk. Two batters later, Joe Costigan walked with two outs, then Wilkerson walked to load the bases. Lamb laced a double down the left-field line to score Dunster and Costigan, then McGibbon lined a single to right-center to plate Wilkerson and Lamb. In the seventh inning, pinch-hitter Dominic Attanasio singled up the middle and went to second on Dunster’s single through the left side. After both runners moved up a base on Kevin Caughman’s groundout, Addison Johnson reached on a two-out fielding error that allowed Attanasio and Dunster to score. In the eighth inning, McGibbon reached on a one-out, infield single. Two batters later, Epps, who was a double short of the cycle at the time, lined a two-out single that one-hopped right-fielder Sam Payne. Payne booted the ball and Epps advanced to second on the error as McGibbon scored. After a leadoff single in the ninth inning by J.P. Craven, the next three Wildcats were retired in the game that ended at 1:05 AM. Ten different Tigers had at least one hit, including seven with at least two hits. Lamb set a career-high for hits in a game, as he went 5-for-5 with a double, three RBIs, and three runs. In his last regular-season home game, Epps, a senior, also established a career high for hits, as he went 4-for-6 with a triple, homer, three RBIs, and two runs. Hinson went 3-for-4, while Shaffer went 2-for-2 with a homer, three RBIs, three runs, and one walk. Drew Gadaire had a team-high two hits for the Wildcats, who amassed seven hits in the contest. Clemson will travel to Tallahassee, FL to take on #4 Florida State in a three-game series starting Thursday at 6:00 PM.