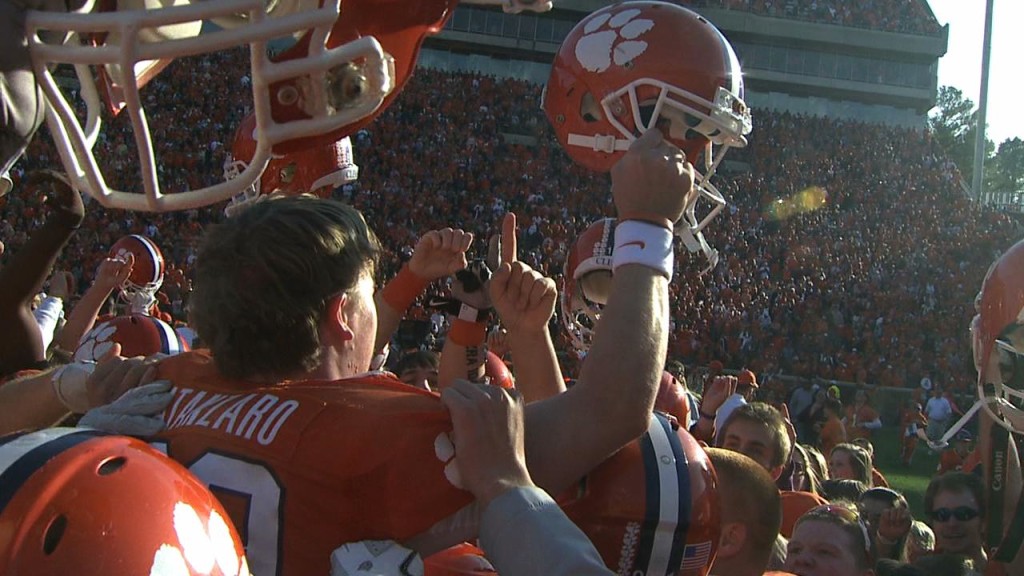 Tigers in Video: – Chandler Catanzaro / Clemson Kicker – Tonya Catanzaro / Chandler’s Mom – Dabo Swinney / Clemson Head Coach – Tajh Boyd / Clemson Quarterback CLEMSON, S.C. (WOLO) — It was a fourth quarter of redemption as Clemson sophomore kicker Chandler Catanzaro hit a game winning 43-yard field goal as time expired to give Clemson a 31-28 victory over Wake Forest on Saturday. The win also clinches the ACC Atlantic Division Title for the Tigers for the second time in three years. Catanzaro, who missed a 30-yard game-winning attempt earlier in the fourth, was the first Tiger kicker to win a game at the end of regulation since Mark Buchholz kicked a 35-yard game winner in 2007 in a 23-21 victory over South Carolina. Since 1948, when the stat was first kept track, it marks the first game winning field that Clemson has won as time expired on its home field. Clemson (9-1, 6-1 ACC) advances to the ACC Championship game on Decemeber 3 and will face either Virginia Tech or Virginia. Injury news: Freshman wide receiver Sammy Watkins suffered a right shoulder injury in the third quarter of Saturday’s game. He left the game and did not return. X-ray’s were negative, and head coach Dabo Swinney feels Watkins is day-to-day but did not say for sure if he would be available for the North Carolina State game next weekend. Senior offensive lineman Philip Price injured his leg during the Wake Forest game. He did not finish the game and Swinney thinks it may be an MCL injury but said he would know more on Sunday. Clemson has two more games before the ACC Championship game, next week at North Carolina State, and November 26 at South Carolina. The N.C. State game will kick-off at 3:30pm and will air on ABC Columbia.