Clemson Back on Practice Field 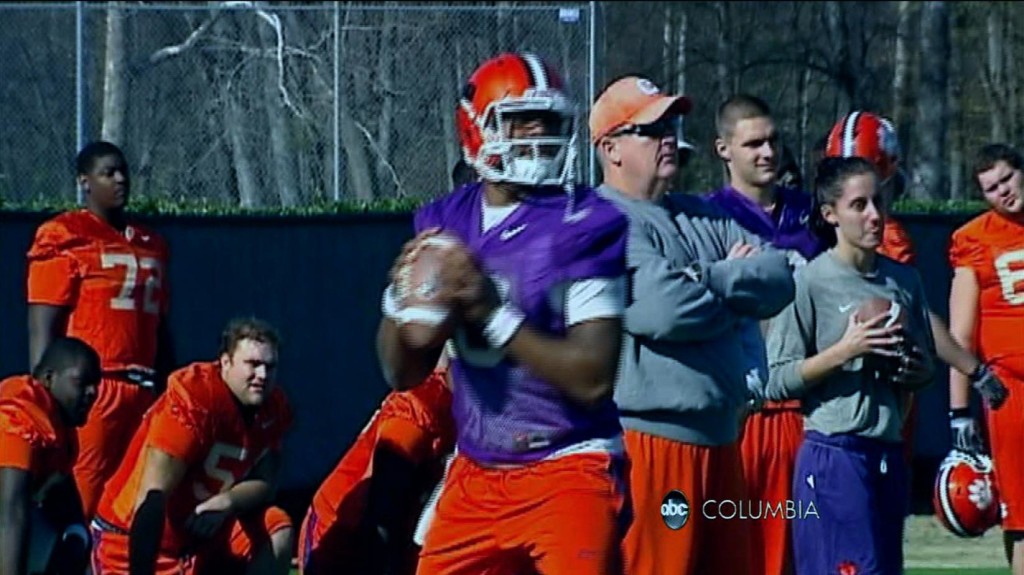 CLEMSON, SC (Clemson Athletics)— The sun continues to shine down on the Clemson football team. The Tigers opened practice for the Discover Orange Bowl Tuesday to a sunny and warm day without a cloud in the sky. It was their first practice since winning the ACC Championship game on Dec. 3. Maybe it was a sign of things to come for the Tigers as they will practice for seven days in warm and sunny Florida starting on Dec. 27th. “I can‘t remember many bowl practices with a day like this,” Clemson Head Coach Dabo Swinney said. “Usually bowl practices are not like this. You have bad memories in your mind about the weather for bowl practice. It is usually freezing or it is nasty. I mean what a beautiful day to get back to work. “It was good to see the guys. They have a great spirit to them. They have been off for a little over a week and they needed the break. That‘s been good for them. It‘s good to get back to work.” Swinney said Tuesday was a day to get back to the fundamentals a little bit on both sides of the ball. The coaches also introduced West Virginia to the team and what they do. The coaches plan to trickle in the game plan throughout the week. “You can work too much on an opponent so you want to keep it fresh,” Swinney said. “You want to get on and off the field.” The Tigers are having to jockey practice around finals this week, which is a little unusual compared to past years. Usually, exams are over by this week and the coaches can plan normal practices, but this year exams are a week later due to school starting back a week later in the fall. Clemson will have another scaled down practice on Wednesday, and by Thursday things will be pretty much back to normal as most of the players will be done with finals. The team will just have meetings on Friday and then they will go heavy on Saturday. The Tigers will practice through Dec. 21 in Clemson, and then will go home for the Holiday after meetings on December 22 and will reconvene in Miami, FL for the Discover Orange Bowl on Dec. 27th. “We will have a little minicamp situation for a couple of days, if you will, before the bowl gets started” he said. “I think we have a good plan and a good schedule. I really liked how they came out to work today, and I think they were really excited about getting back to work.” Despite the short practice Tuesday, Swinney said they got a lot out of their limited time. “It was a good start. We ran them pretty well after practice,” he said. “We need to push them and stretch them out a little. I thought they pushed through that very well, especially the guys that have been playing and that we are counting on.” Swinney also announced that running back Mike Bellamy is still suspended indefinitely for a violation of team rules and will not participate in any bowl practices and will not join the team in Miami for the Orange Bowl. “The expectation is that he will have an opportunity to come back with us in January,” Swinney said. “If he does the right things, he will have a chance to go through spring (practice) and if he doesn‘t, he will not.” Bellamy is finishing finals this week, and will go home after he is done.