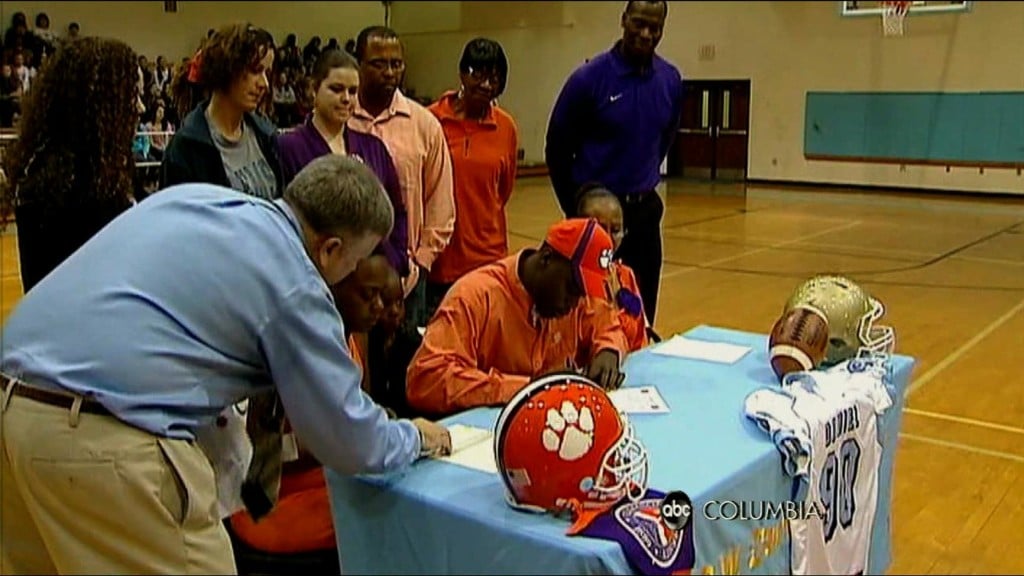 CLEMSON, S.C. (AP) — Fresh off a surprise Atlantic Coast Conference title, Clemson coach Dabo Swinney snagged another highly-rated recruiting class as he tries to rebuild the Tigers into a national power from the bottom up. Clemson signed 20 players Tuesday in a class that hovered around the top 10 in most of the rankings. Swinney signed a similarly ranked class last year, and the coach bragged that just like he won the school’s first ACC title in two decades last season, he now also had the first back-to-back top 10 classes since the late 1980s too. The Tigers should go into next season with 60 of its 85 scholarship players either freshmen or sophomores and just 11 of them seniors “It’s really exciting to me because we are built to make a run,” said Swinney, who is going into his fourth full year as Clemson’s coach. While Swinney mentioned last year’s ACC title several times, not a single word was said about the Tigers 70-33 loss in the Orange Bowl to West Virginia. Instead, Swinney spoke about building a program that competes nationally both for recruits and on the field. Clemson signed 10 defensive players, nine players on offense and a punter. Four signees were on the offensive line, and four were on the defensive lines, both big needs for the Tigers. With such a youthful team, Swinney expects at least some of the newcomers to get on the field quickly. “They’re talented. They are the right kind of guys,” Swinney said. “We just have to grow them up.” This year’s signing day was much less dramatic than last year’s, as 17 of Clemson’s 20 recruits had agreed to come before the 2011 season kicked off. They all kept their word. And the biggest recruit the Tigers were still pursuing, D.J. Reader, called Swinney on Monday night to tell him he was coming. Reader is a 6-foot-3, 300-pound offensive lineman from Greensboro, N.C., who also plans to be a pitcher for the Clemson baseball team. Swinney said he liked how Reader just didn’t go for the couch after football season. Reader is a major contributor on his high school basketball team, along with his baseball skills. “If nothing else, I want to see a 300-pounder come off the mound throwing 93,” Swinney said, Perhaps the most interesting recruit Clemson signed was Chad Kelly. The 6-foot-3, 209-pound quarterback from Buffalo, N.Y., is the nephew of NFL Hall of Fame quarterback Jim Kelly. Chad Kelly took to Twitter last week to issue a challenge to the other backup QBs for the Tigers, saying he was coming to play as a freshman and wasn’t going to be satisfied sitting on the bench, prompting second-string quarterback Cole Stoudt to respond that he didn’t appreciate people talking before they did anything on the field. Swinney said he doesn’t use Twitter, but another coach told him about the exchange. He shrugged it off, calling it nothing serious and saying he likes Kelly’s swagger. “It’s nothing different than somebody writing a note or writing it on the chalkboard,” Swinney said. “Except now, they talk in front of everybody. It blows my mind.” Getting most of this year’s recruiting class under wraps early had another benefit other than allowing coaches to sleep better this week. Recruiting coordinator Jeff Scott said he spent most of the last month looking at juniors in high school while a lot of recruiters at other schools were trying to make sure their senior classes stayed together, “I’d love to be like that every year,” Scott said. “You can use all of that time to get a head start on the next class.”