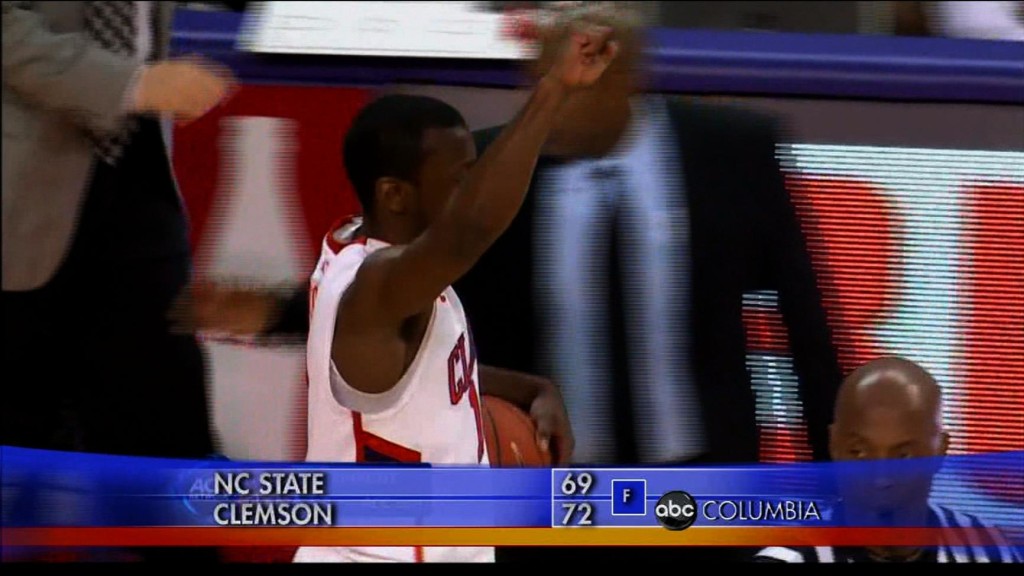 CLEMSON, S.C. — Andre Young scored 12 points, including the go-ahead 3-pointer with 11.5 seconds left, to help Clemson beat North Carolina State 72-69 in overtime on Saturday. Young is the Atlantic Coast Conference’s fourth best three-point shooter, but did not have a basket from behind the arc until he made a straightaway three to tie the game at 69-all with 1:13 left in overtime. Young’s next shot was even better, a catch-and-shoot three from the left corner to put the Tigers (15-13, 7-7 ACC) out front to stay. C.J. Leslie was off the mark on a 3-point try on North Carolina State’s attempt to force a second overtime on the final possession. Lorenzo Brown and Leslie had 18 points each to lead the Wolfpack (18-11, 7-7), who lost their fourth straight. It looked like Brown would be the star of the overtime as he had three close-in baskets to build a 69-66 lead with 2:24 left. The Wolfpack had the chance to extend their lead, but C.J. Williams missed an open three before Young’s first long-range basket. Brown had the chance to put North Carolina State in front with 43.7 seconds to go, yet the 76-percent foul shooter missed two free throws that led to Young’s dramatic basket. Young picked up the rebound after Leslie’s final miss as the Tigers celebrated their fourth win in the last five games. Young was lifted off the court by freshman teammate Bernard Sullivan to the cheers of the fans at Littlejohn Coliseum. Both teams had chances to win before overtime. Leslie, who scored 9 of his team’s final 13 points of regulation, two foul shots put the Wolfpack ahead 62-60 before Tanner Smith tied it with two free throws of his own with 4.1 seconds left. Milton Jennings led the Tigers with 17 points before fouling out in overtime. Smith added 15 while Devin Booker had nine points and 10 rebounds. C.J. Williams had 16 points for North Carolina State. Clemson had found its stride of late and the Tigers continued their solid play in the opening half against the Wolfpack. And the Tigers got plenty of help from their freshmen class. T.J. Sapp hit a 3-pointer to give them their first lead, Rod Hall drove the lane through two defenders for a layup and K.J. McDaniels soared high above the rim to slam down a Young missed shot during the Tigers’ 6-0 run that put them on top 31-26. It looked as if Clemson would let that edge slip away before halftime as Williams and Brown struck for outside shots. But Jennings closed the period with a long 3-pointer with 5.2 seconds left that sent the Tigers into the locker room ahead 34-30. Not that the Wolfpack played poorly. They shot nearly 54 percent for the period (14 of 26) as a team while Williams and Brown kept North Carolina State in it, making a combined 8 of 14 shots for 18 points and eight rebounds. The Wolfpack finished 30 of 60 from the field. North Carolina State came in off a three-game losing streak, its longest of coach Mike Gottfried’s first season. However, the losses came to the ACC’s top three teams in Duke, North Carolina and Florida State. Clemson celebrated its 100 years of basketball at halftime with several of the program’s greatest players back to take the court to the cheers of those at Littlejohn. Those returning included former NBA standout Elden Campbell, the Tigers all-time scoring leader, and current Washington Wizards starter Trevor Booker.