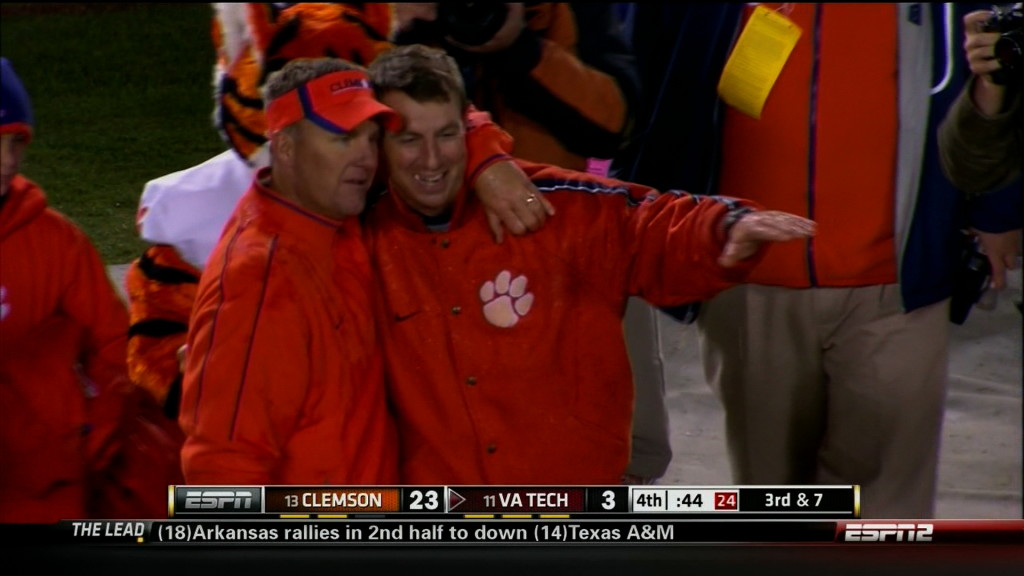 CLEMSON, S.C. (CU SID) — Clemson Athletic Director Dr. Terry Don Phillips announced Thursday that Head Coach Dabo Swinney has agreed in principle to a three-year contract extension that will keep him as leader of the Tigers program through the 2017 season. The extension now makes the contract six years in length and the yearly compensation is $1.965 million per year, plus performance incentives and escalators. “This contract reaffirms our commitment to Coach Swinney and his staff,” said Clemson Board of Trustees Chairman David Wilkins. “We look forward to our football program winning many more ACC Championships under his direction.” Swinney won the Bobby Dodd Award as the National Coach of the Year for 2011, the first Clemson football coach to be named a national coach of the year since Danny Ford in 1981. Swinney led Clemson to its first ACC Championship in 20 years with a 38-10 victory over third ranked Virginia Tech in the league title game in Charlotte in early December. The win sent Clemson to the Discover Orange Bowl, the school’s first BCS Bowl appearance and first Orange Bowl appearance in 30 years. Over the course of the season, Clemson won four games over top 20 teams, a record for one season, including three victories over top 11 teams, tied for the most in school history. Clemson finished with a 10-4 record and the 10 wins were the most for the program since 1990. In three years he has taken Clemson to two Atlantic Division titles, the first two for the program since the ACC went to a division format in 2005. The Tigers have also finished in the top 25 twice without having been ranked in the preseason. “Coach Swinney has agreed to a significant contract extension,” said Phillips, who has been Clemson’s Athletic Director since the summer of 2002. “We feel very good about the direction of our football program. In a short period of time, Coach Swinney has taken us to two Atlantic Division titles, had two top 10 recruiting classes, two top 25 seasons, and won an ACC Championship in a season when the league was strong enough to have two teams selected for BCS Bowls for the first time. “Our program has also had nationally recognized results academically, in terms of academic progress, grade point average and graduation rate. He has had the top career APR score in the nation (988). I know we certainly have more hills to climb, but with his passionate leadership and work ethic, I am confident we will get where we intend to be.” Swinney has also had outstanding success in developing his players, as he has produced 36 players who have signed NFL contracts. He has coached eight All-Americans in just three years, including two unanimous All-Americans in C.J. Spiller (2009) and Da’Quan Bowers (2010). Spiller was sixth in the Heisman Trophy voting in 2009, and Bowers won the Nagurski Award as the top defensive player in the nation in 2010. Dwayne Allen won the John Mackey Award as the nation’s top tight end in 2011, and Sammy Watkins was the National Freshman of the Year by Rivals.com in 2011. Watkins was also just the fourth true freshman to make first-team AP All-American. Swinney was pleased with the contract. “This shows a great commitment on the part of David Wilkins and the Board of Trustees, President Jim Barker and Terry Don Phillips,” said Swinney. “I am very appreciative of their confidence in the program and my staff. “We had many landmark accomplishments this past year, including winning the ACC Championship in a very competitive league. The administration has provided us with the resources to continue our pursuit to be the best in the ACC and compete for the National Championship for years to come.