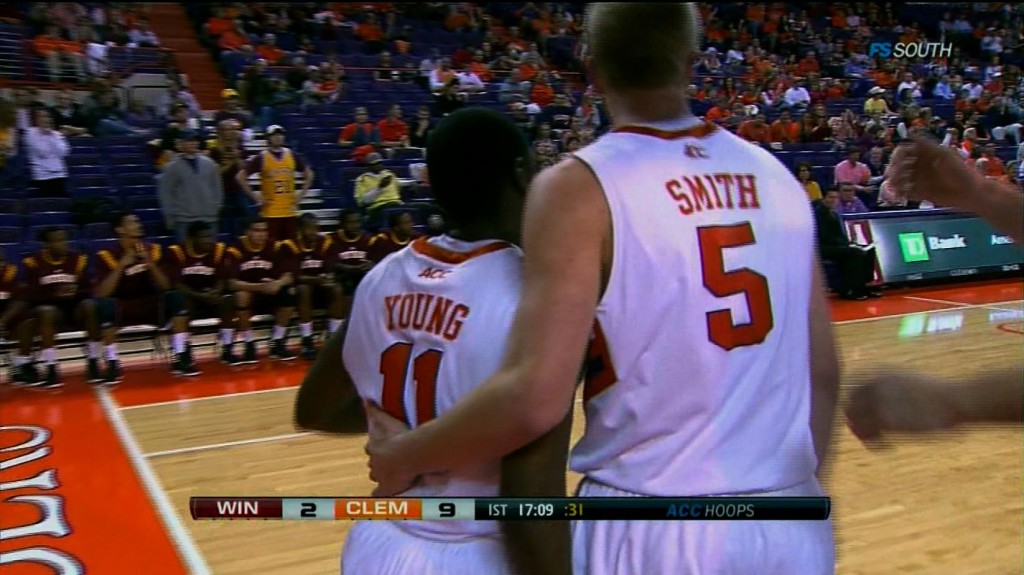 CLEMSON, S.C. (CU SID) — Three members of Clemson‘s 2012 senior men‘s basketball class signed professional contracts to play in Europe in 2012-13. Catalin “Bobo” Baciu signed in July with Cluj Mobitelco in his home country of Romania. Earlier this week, both Tanner Smith and Andre Young signed contracts to play professionally in the Netherlands. Smith signed with Landstede Zwolle, while Young inked a one-year deal with the Eiffel Towers. The seniors, including a fourth member in 2012 Harlem Globetrotters draft choice Bryan Narcisse, were instrumental in helping Clemson to the NCAA Tournament each of their first three seasons and a total of 82 wins from 2008-12. The class never had less than a .500 record in ACC play as well. Baciu appeared in all 31 games as a reserve center in 2011-12. He averaged a career-best 4.1 points per game and led Clemson with a .581 field goal percentage. Baciu was the Tom Lynch Award recipient as Clemson‘s most improved player in 2012. He earned his undergraduate degree in sociology, with emphasis in criminal justice, in May. As a senior in 2011-12, Smith was the only player in the Atlantic Coast Conference to average at least 10 points (11.2), five rebounds (5.1) and four assists (4.1) per game. He was second on Clemson‘s team in scoring and led the Tigers in assists per game, while ranking among the league leaders in steals per game and assist-to-turnover ratio. He finished his career 11th in Clemson history with 159 steals. Smith earned his undergraduate degree in marketing in December of 2011, and was a four-time All-ACC Academic Team selection. Young was Clemson‘s leading scorer this past season as a senior. The Albany, GA native averaged 13.3 points per game and concluded his four-year run with 1,223 points, 25th on the school‘s all-time list. Young made 236 three-point goals in his career, fourth-most in Clemson history. He also was third in Clemson history with a career 2.1 assist-to-turnover ratio and seventh with 184 steals. Young graduated in May with a degree in health science and was a two-time member of the All-ACC Academic Team.