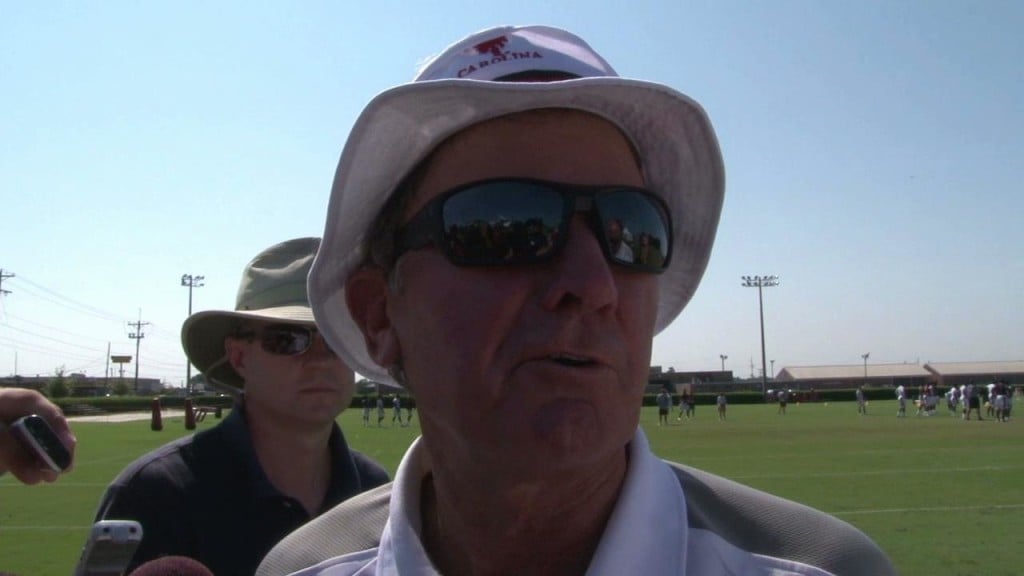 COLUMBIA, S.C. (USC SID) — After enjoying Fan Appreciation Day and a night off on Sunday, the University of South Carolina football squad returned to the Bluff Road “Proving Grounds” Monday morning for a two-hour full pad workout. Cornerback Victor Hampton returned to practice on Monday after missing a couple of days with a bruised quad. Also back was running back Mike Davis (bruised knee). Among those who did not practice on Monday were running back Brandon Wilds (sprained ankle), cornerback Akeem Auguste (groin) and tight end Kelvin Rainey (concussion). Head coach Steve Spurrier announced that the Gamecocks would scrimmage on Wednesday night at Williams-Brice Stadium beginning at 7:30 p.m. That scrimmage will be open to the public and will be the final open practice of the preseason camp for the Gamecocks. “We want to turn the lights on and maybe get some fans out,” said Coach Spurrier. “We want to try to find out who our best ballplayers are. It will be the last one of the preseason that is open to the public. We‘ll start closing up (practices) and game planning (for Vanderbilt) after Wednesday night.” Due to construction work being done on the west side seating area, fans are asked to enter the stadium through gate 18 on the east side and sit in the lower east stands. “Today‘s practice was so-so,” continued the Gamecocks‘ eighth-year head coach. “Some guys who did well last week in the scrimmage didn‘t do very well today, which is our history. One guy has a good day, good showing, then doesn‘t do very well the next time. We‘ve got to learn how to repeat your performances day after day.” The Gamecocks appear to have some depth at tight end this season and that position could become more of a factor in the offense. “If they can get open and catch, we throw it to whoever that is,” said the Head Ball Coach. “If he can get open and catch, he can get a lot of balls.” Walk-on senior David Wilkins was moved from wide receiver to cornerback on Monday. He will now wear number 32 instead of 85. The Gamecocks are scheduled to return to the practice fields Tuesday morning at 8:30 a.m. That practice is open to the public.