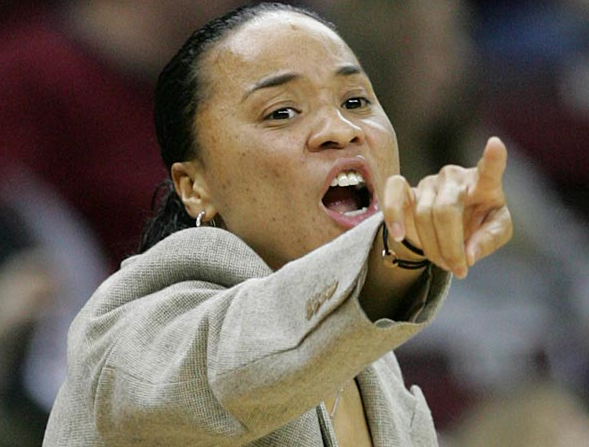 COLUMBIA, S.C. (USC SID) — No. 19/14 South Carolina looks for its first win on the West Coast in the Dawn Staley era Saturday afternoon, facing San Diego State at Viejas Arena. The Gamecocks delivered the first win over a ranked opponent in the Staley era in the last meeting between the two teams – in the 2009 Paradise Jam when the Aztecs were No. 23 in the USA Today Coaches’ Poll.

Complete game notes and video of Staley and junior forward Aleighsa Welch previewing the game can be found at:
http://www.gamecocksonline.com/sports/w-baskbl/spec-rel/112213aab.html

South Carolina Notables
*    With 22 offensive rebounds so far this season, junior Aleighsa Welch has moved into sixth place in school history with 257 career offensive boards, just 17 away from a spot in the top five.
*    South Carolina leads the SEC in field goal percentage (.490), rebounding margin (+8.6), blocks per game (7.6) and assist-to-turnover ratio (1.6).
*    Four Gamecocks average double-figure points this season with 12.4 ppg the minimum in the group. South Carolina has had five hit double figures in three games this season, which already exceeds the number of any previous season in the Dawn Staley era. In fact, in the previous five seasons under Staley, five Gamecocks scored double digits in a game just five times.
*    Alaina Coates earned her first conference award of the season as she was named SEC Freshman of the Week (Nov. 18) for her efforts in a pair of wins last week. She averaged a double-double on the week and blocked seven shots.
*    Junior Aleighsa Welch is the lone SEC player to rank among the league’s top 10 in both scoring and rebounding – 14.6 ppg (10th), 10.6 rpg (2nd).
*    Center Alaina Coates is the SEC’s top rebounding freshman, ranking eighth in the league with 9.0 boards per outing.
*    Junior Elem Ibiam is among the SEC’s best centers on both ends of the floor as she leads the league in blocks per game (3.0), recording at least three in four games this season; is second in field goal percentage (.676), shooting 50.0 percent or better in every game; and holds 14th in scoring at 13.6 points per game.
*    Sophomore Khadijah Sessions’ efficiency at the point guard spot in the last three games has moved her into 15th in the SEC in assists (4.0) and fourth in assist-to-turnover ratio (4.0). She has handed out a career-high five assists twice already this season and recorded at least three in every game, while committing more than one turnover just ones (2 vs. LA Tech).

Notes
A South Carolina Win Would…
*    Be the Gamecocks’ second in as many games against San Diego State.
*    Be the Gamecocks’ first in three trips to the West Coast in the Dawn Staley era. South Carolina lost its 2012 NCAA Sweet 16 game to Stanford in Fresno and dropped a pair of road games at Stanford and UC Davis in the 2010-11 season.
*    Bring head coach Dawn Staley to 98 wins at South Carolina, putting her four behind Pam Parsons (1978-82) for third all-time in Gamecock women’s basketball history.

San Diego State Series Notes
The Gamecocks and Aztecs have met just once before today’s contest – a 58-55 South Carolina victory on Nov. 28, 2009, in the last game of the Paradise Jam. The win was head coach Dawn Staley’s first over a nationally ranked team while leading the Gamecocks as San Diego State was No. 23 in the coaches poll heading into the tournament.

All About Adjustments
Ever the tactician, South Carolina head coach Dawn Staley has her offense clicking best after halftime this season. While the defense – built more on the controlled factor of effort – performs best in the opening 20 minutes, the offense takes was Staley has learned through the first 20 minutes of play and applies it to shine in the second half. The Gamecocks are shooting 55.8 percent (77-of-138) in the second half, compared to 42.9 percent (67-of-156) in the first, resulting in 2.0 more points per game after halftime than before it (41.4 to 39.4). The Gamecock guards seem to have an impact on that as they adjust to defensive alignments to get the ball into the paint, handing out 11.0 assists per second half compared to just 7.4 per first half.