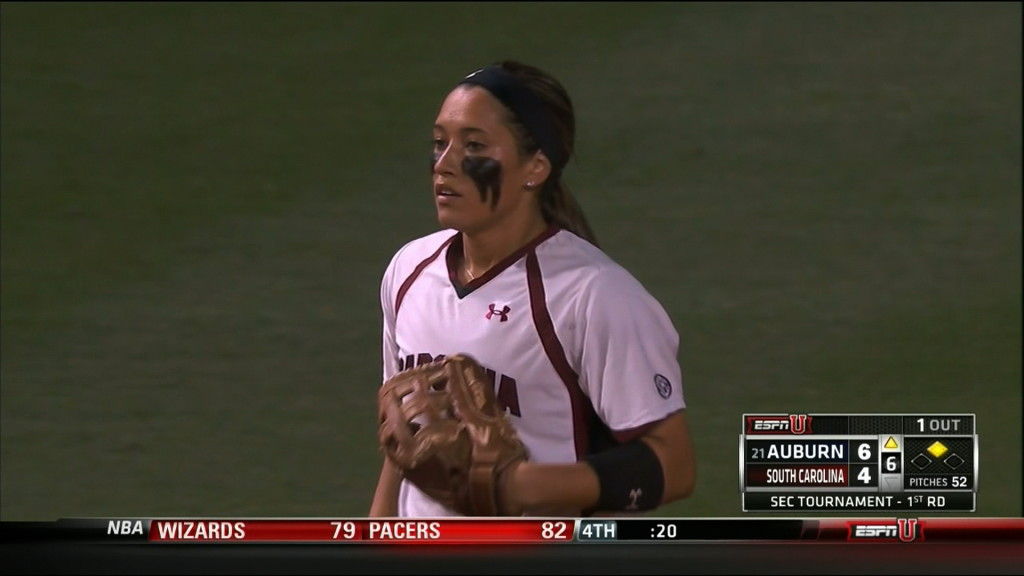 COLUMBIA, S.C. (USC SID) — South Carolina kept working on comeback bids, but No. 22/21 Auburn held onto its final lead of 7-5 for the win on Wednesday night, the first of the 2014 SEC Softball Tournament from Carolina Softball Stadium at Beckham Field. Auburn‘s Emily Carosone went 2-for-4 with a homer and two runs scored, while Kelsey Bogaards had three hits including a double while scoring a run. Jade Rhodes also had two hits with an RBI double for the Tigers. South Carolina got two-hit nights from junior centerfielder Kristen Struett and freshman first baseman Victoria Williams, with Williams hitting a two-run homer and Struett adding an RBI double. Twice, Auburn (39-16-1) posted leadoff homers, started by Carosone sending the first pitch of the game over the wall in left center. Consecutive doubles by Morgan Estell and Jade Rhodes put the Tigers on top 2-0 after an inning. In the fourth, Austyn West drove one out the other way to right center to make it a 3-0 Auburn lead. A wild pitch later in the fourth scored Bogaards from third after she doubled earlier in the inning. South Carolina (35-20) cut the lead to one in the bottom of the fourth. Senior right fielder Chelsea Hawkins walked on four pitches to start the inning and stole second with one down. Struett fouled off five pitches in her at-bat before lacing the 10th pitch into the left-field corner for a double, scoring Hawkins. Williams drilled a 1-2 pitch over the right-field wall for her fourth homer of the year, closing the gap to 4-3. In the fifth with one out, senior designated player Ashlyn Masters punished a 3-0 offering over the “Block C” on the wall in left center for her sixth homer of the season, tying the game at 4-4. The Tigers retook the lead in the sixth when, with runners on second and third and one out, Branndi Melero‘s grounder brought home Tiffany Howard after she started the frame with a walk. The throw to try to nab Melero went wide of first, letting Carosone score as well to give Auburn the 6-4 advantage. On a 2-0 count leading off the bottom of the sixth, junior catcher Olivia Lawrence lined one over the wall in right center, her third of the year, to make it a one-run game and chase Auburn starter Lexi Davis. Marcy Harper gave up a two-out walk but escaped the sixth without giving up the tying run. Auburn tallied an insurance run in the seventh on a wild pitch, letting pinch runner Ashley Leon score from third with the bases loaded and two outs. She replaced Madi Gipson after her leadoff single. The Gamecocks tried to mount a two-out rally in the seventh, with redshirt freshman third baseman Lauren Masters getting a single, but Harper‘s final pitch was lined to right to end the ball game. Davis (20-10) tossed five-plus innings and gave up five earned runs on six hits and three walks while fanning two in the win. Harper only allowed one walk and one hit in her two-inning save, her second of the year. Gamecock freshman Nickie Blue (17-10) took the loss, giving up four runs, three earned, on four hits and three walks in three innings. She struck out two. In the first game of the day, No. 16/15 and seventh-seeded Kentucky needed nine innings to get past 10th-seeded Kentucky, 4-3. Nikki Sagermann hit the walk-off single in the ninth with one out, driving in Ansley Smith after her leadoff walk. A total of 1,270 fans attended the first day of the nation‘s premier conference softball tournament. The SEC Tournament continues tomorrow morning when third-seeded Missouri faces the sixth-seeded LSU Tigers at 11 a.m. on ESPNU.

RCSD looking for missing woman in need of her education

SCHP: One dead after early morning collision on I-77 North