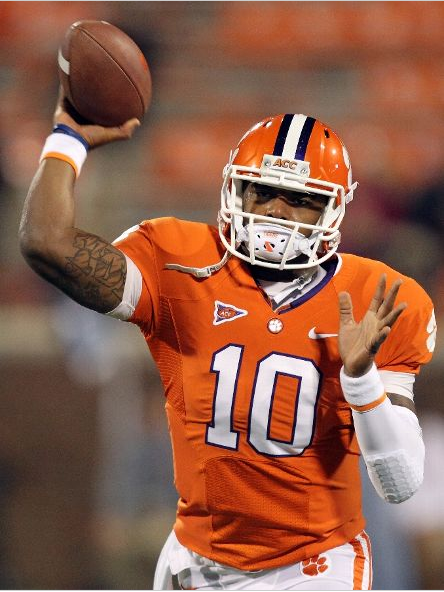 FLORHAM PARK, N.J. (AP) — The New York Jets loaded up on wide receivers and added another quarterback to the mix on a busy final day of the NFL draft. New York entered Saturday with a league-high nine picks and used them all, giving the Jets 12 selections over the three days. They addressed a few key needs during the first three rounds by taking safety Calvin Pryor, tight end Jace Amaro and cornerback Dexter McDougle, but needed depth at wide receiver. On Saturday, they took Oklahoma’s Jalen Saunders at No. 104 in the fourth round and UCLA’s Shaquelle Evans 11 spots later. The Jets also drafted Nebraska’s Quincy Enunwa in the sixth round. Clemson quarterback Tajh Boyd was taken with the last of the Jets’ three compensatory picks in the sixth round. While Geno Smith and Michael Vick will compete for the starting job this summer, Boyd will likely go up against Matt Simms for the No. 3 spot. Jets coach Rex Ryan is quite familiar with Boyd, who was a college teammate of his son Seth, a wide receiver for the Tigers. Among the Jets’ other selections were Furman offensive lineman Dakota Dozier (fourth round), Iowa State linebacker Jeremiah George (fifth), Northwest Missouri State cornerback Brandon Dixon (sixth), Louisiana Tech defensive end IK Enemkpali (sixth) and Utah linebacker Trevor Reilly. Saunders is a short — 5-foot-9 — but speedy receiver and punt returner who caught 123 passes in two years at Oklahoma after transferring from Fresno State. He said he went to the NFL combine at 165 pounds, but gained 10 pounds after there were some concerns about his weight. “I would describe my playing style like a gorilla,” Saunders said during a conference call. “I’m a savage on that field. I would say between a gorilla and a terrier, a pet dog or a terrier. They’re real small and people don’t expect too much from them. They always like to fight and always like to play around. “That’s just the type of player I am. I’m real feisty.” Saunders, from Elk Grove, California, had 61 catches for 729 yards and eight TDs last season, and added two scores on punt returns. He could complement Jacoby Ford as one of the Jets’ key return men. “I definitely feel like I can come in and compete for either a receiver position or a punt return job,” Saunders said. The 6-1, 213-pound Evans, from Inglewood, California, had nine touchdown catches for UCLA last season. He had at least one reception in each of his last 28 games with the Bruins, and led the team in catches his last two years. He spent his first college season at Notre Dame, but said “it just wasn’t a good fit,” and transferred to his hometown college team. “I’m a guy that can go out there and do whatever you need me to do: catch a check-down pass, catch a deep pass and guy that’s also going to block for you,” he said. “Just be an ultimate team player.” Dozier, at 6-4 and 310 pounds, played mostly left tackle at Furman but started his last two games in college at guard. The native of West Columbia, South Carolina, who’s nicknamed “Bull Dozier,” is expected to play at the guard spot for the Jets. George, from Clearwater, Florida, is a bit undersized at 5-11 and 230 pounds, but led the Big 12 with 133 tackles as a senior and has good quickness. He’s also strong — benched 225 pounds 28 times at the combine — and could be a backup at inside linebacker and contribute on special teams for the Jets. “I play the game of football with my heart, not my height,” George said.