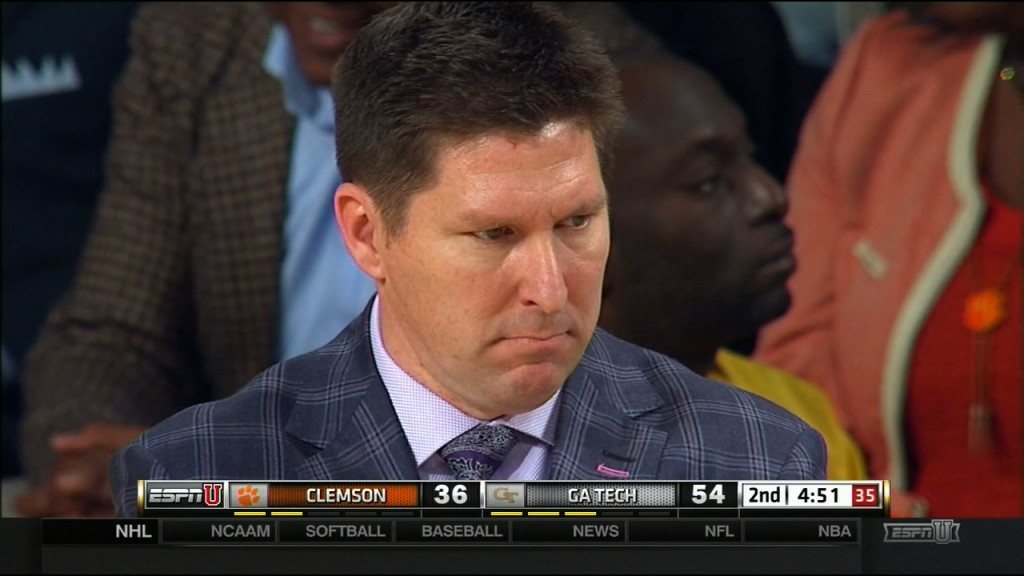 ATLANTA (CU SID) — A 14-0 run midway through the second half led Georgia Tech to a 63-52 victory Monday over Clemson in McCamish Pavilion. The Tigers dropped to 15-11 on the season, 7-7 in ACC play. The win was Georgia Tech‘s 12th of the season, moving the Yellow Jackets to 3-11 in the league. It also stopped Clemson‘s 10-game winning streak over Tech, second-longest in program history over another ACC foe. Clemson shot poorly throughout the contest, hitting just 20 of 55 shots for a 36 percent clip. The Tigers, who have out-rebounded five ACC teams by double-digit margins this season, had the tables turned on them with Tech winning the battle of the boards 38-29. Individually, Austin Ajukwa led the Tigers with a career-high 10 points. Josh Heath led Tech with 14 points. Tech jumped out to an early 8-2 lead as Clemson connected on just one of its first nine shot attempts. But slowly the basket opened up, and the Tigers hit five of their next seven to pull back even on two occasions. The Jackets extended their lead to as much as seven at 23-16, but Clemson clamped down and did not allow a field goal the final four minutes of the half. Donte Grantham hit a three and Blossomgame scored on a drive to cut the deficit to just two at intermission. Damarcus Harrison tied the game at 32 in the second half with his 100th career three-point goal, but that sent Tech on its 14-0 run to seize control. Clemson was also plagued by turnovers throughout the game, committing 14 for the night. The Tigers stay on the road and play at No. 4 Duke on Saturday. The Tigers and Blue Devils are set to tip off at 4:10 p.m. from Cameron Indoor Stadium. The game will be televised by ESPN.