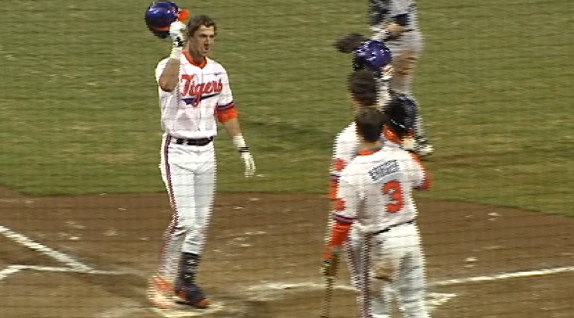 CLEMSON, S.C. – Weston Wilson homered twice and Chris Okey added a three-run homer as well as Clemson defeated fifth ranked South Carolina 11-4 in game one of a three-game series on Friday night at Doug Kingsmore Stadium. The Gamecocks are now 6-2 on the year as the team‘s six-game winning streak is snapped with Clemson now 6-2 on the year also. Connor Bright homered and drove in a career-high four runs in the loss for the Gamecocks. Elliott Caldwell and Gene Cone had a pair of hits as well. Tyler Krieger led Clemson with three hits with Wilson, Okey and Chase Pinder with two apiece. Clemson broke ahead 4-0 in the bottom of the first inning. Tyler Slaton reached on catcher‘s interference and scored on Krieger‘s one-out RBI infield single. Consecutive singles by Steven Duggar and Okey increased the lead to two runs with Pinder driving both in with a two-out triple down the right field line. The Tigers increased the lead to 8-0 in the third inning on the back of a pair of homers. Okey hit a three-run homer that just cleared the fence in left-center, followed by a solo shot off the bat of Wilson. South Carolina cut the deficit to 8-3 in the top of the fourth inning as singles by Max Schrock and Kyle Martin set the stage for Connor Bright, who launched a three-run homer to left-center for his second homer of the season. Bright factored in the fourth run of the game as the Gamecocks loaded the bases in the fifth inning with singles from Gene Cone and Elliott Caldwell as well as a walk to Schrock. With one out, Bright knocked a grounder down the third base line that Tiger third baseman Weston Wilson mishandled and Cone scored to cut the deficit to four runs. With the bases loaded, Matthew Crownover worked out of the jam though as he fanned Alex Destino and DC Arendas on a pair of strikeouts. Carolina looked to continue the rally in the top of the sixth inning. Cone reached base with two outs on a hit by pitch, Caldwell singled and Schrock walked to load the bases. The Gamecocks would then fall victim of a bad break as a Martin single into the hole at second base bounced and nicked Schrock on base for the third out of the inning and ending the threat. Wilson added a three-run homer in the bottom of the seventh to complete the scoring for the Tigers. South Carolina starter Wil Crowe suffered the loss and is now 1-1 on the year. He worked six-plus innings and allowed nine runs, eight earned, on 11 hits with a walk and six strikeouts. Crownover earned the win and is 2-0 on the year. He allowed four runs on six hits in five innings with four walks and seven strikeouts. GAME CHANGER After Matthew Crownover fanned a pair of Gamecock batters with runners on second and third with one out in the top of the first inning, Clemson followed with four runs in the bottom half of the inning. KEY STAT Clemson‘s 3-7 order hitters Tyler Krieger, Steven Duggar, Chris Okey, Weston Wilson and Chase Pinder drove in all 11 runs and combined for 10 of Clemson‘s 12 hits. NOTABLES one space· Connor Bright‘s fourth inning home run was his second of the year and ties him with Alex Destino for the team lead. Bright tallied a career-high four RBI. He also has 10 career RBI vs. Clemson and has drove in at least one run in six of seven games he has played against the Tigers. one space· Max Schrock drew two more walks and has a team-leading 13 on the year. It is Schrock‘s 5th multi-walk game of the season one space· Gene Cone has hit safely in all eight games this year and has a nine-game hitting streak dating back to last year. one space· Elliott Caldwell and Kyle Martin each tallied multi-hit games for the Gamecocks one space· The loss snaps a four-game winning streak for South Carolina against Clemson. QUOTABLE Head Coach Chad Holbrook “The ball was getting away from Wil (Crowe) a little bit (early in the game) and he left a couple up in the zone. He settled in and was able to get the game under control. We had a couple of chances with the bases loaded. The ball that hit Max could have brought us a couple of runs closer, but we didn‘t do enough and you have to congratulate (Clemson), because they played their butts off. UP NEXT The series shifts to Greenville for game two in the Reedy River Rivalry showdown at Fluor Field. First pitch is 2:30 p.m. The game is being streamed on greenvilledrive.com and can be heard on the Gamecock IMG Network including flagship station, 107.5 FM, “The Game.”