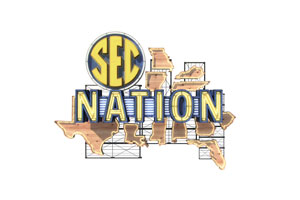 COLUMBIA, S.C. (USC SID) — SEC Network‘s college football pregame show closes out its second season visiting the South Carolina campus, on Saturday, Nov. 21, and the Auburn campus, on Saturday, Nov. 28. For the second year, SEC Nation has brought the sights & sounds of game day from every university in the Southeastern Conference. SEC Nation was originally scheduled to visit South Carolina on Oct. 10, but due to the devastating flooding in the region, the show diverted to the University of Tennessee. SEC Nation will preview the Gamecocks‘ clash against in-state opponent, The Citadel, prior to the game‘s noon kick. The show will utilize two locations to capitalize on the early game-time. SEC Nation airs live from Gamecock Park from 10 to 11:30 a.m. ET, and the last half-hour of the show, 11:30 to noon, Kaylee Hartung moves to the sidelines for the show‘s conclusion as the stadium fills up. Saturday‘s show from Columbia, S.C. also includes three features: a spotlight on Head Coach Gary Pinkel‘s tenure at Missouri following his recent retirement announcement, an in-depth look at Alabama‘s defensive line and a reflection on how student-athletes helped the state of South Carolina recover this fall.