Republicans by more than a 20-point margin support Donald Trump’s proposal to temporarily ban Muslims from entering the United States – but independents and Democrats oppose the idea by wide margins, producing a broadly negative reaction among Americans overall.

All told, 36 percent of adults in a new ABC News/Washington Post poll support Trump’s suggestion, while 60 percent say it’s the wrong thing to do. Support reaches 59 percent among Republicans, who account for slightly fewer than a quarter of all adults. But it plummets to 38 percent among political independents and just 15 percent among Democrats. 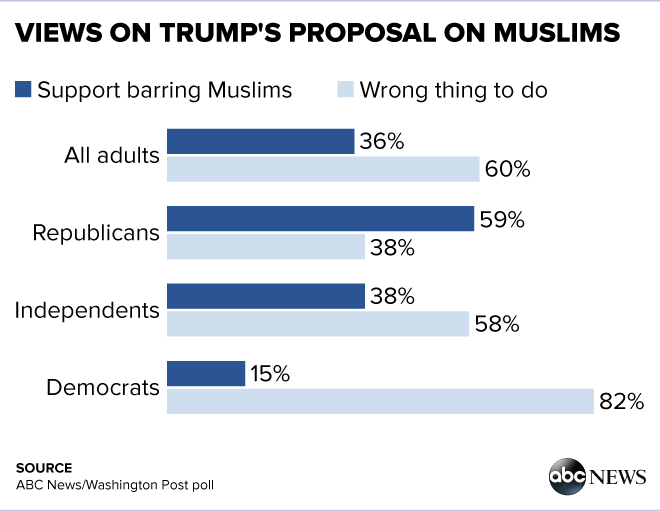 Other attitudes connect, as well. Support for Trump’s suggestion is higher among those most concerned about terrorism and about illegal immigration (the latter a wellspring of Trump’s support) vs. other issues. And this poll, produced for ABC by Langer Research Associates, finds that backing for the plan is especially high among those looking for a political outsider – another Trump strength, built upon his willingness to express controversial sentiments.

Among the majority of Americans who think Muslims in the United States experience unjustified discrimination, just 19 percent support the travel ban. Among those who see no discrimination, or discrimination that they think is justified, support for the Trump proposal soars to more than six in 10.

In a result little changed from an ABC/Post poll five years ago, 28 percent think mainstream Islam encourages violence against non-Muslims; 54 percent instead call it a peaceful religion, with the rest unsure. Republicans are twice as likely as Democrats to think mainstream Islam encourages violence, 40 percent vs. 20 percent, with independents between the two. 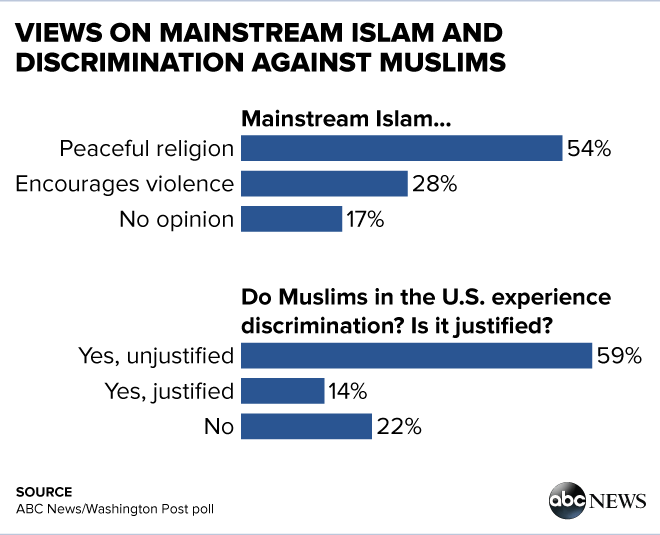 Again there’s a strong relationship between this view and opinions on Trump’s plan. Among those who think mainstream Islam encourages violence, 61 percent favor temporarily barring non-citizen Muslims from entering the United States. Among those who see Islam as peaceful, just 22 percent support Trump’s proposal. 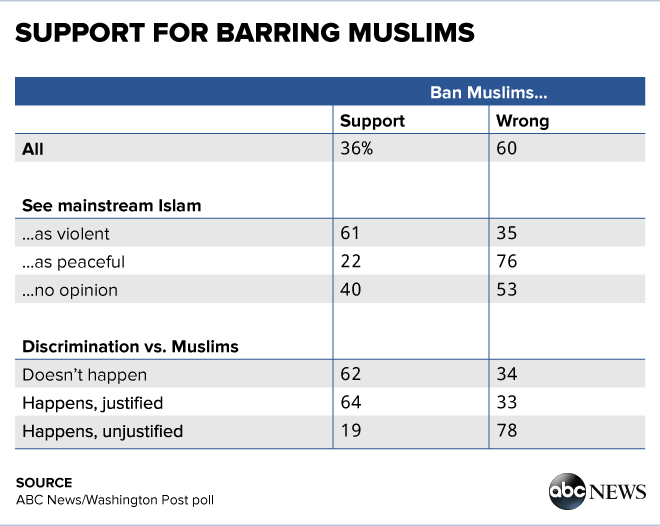 As noted, other political attitudes play into views on admitting Muslims. The outsider issue looms large: Among Americans mainly interested in a presidential candidate from outside the political establishment (chiefly Republicans), Trump’s proposal is backed by 59-38 percent. Among those more focused on a candidate with political experience (chiefly Democrats), support is a vast 37 points lower (22-75 percent, pro-con).

Further, Americans who cite terrorism or immigration as the most important issue in the presidential election (again mainly Republicans) divide essentially evenly on Trump’s proposal, 49-48 percent. Among those who pick another issue (the economy, health care and tax policy were the choices), backing for the Trump plan dives to 24 percent, with 72 percent saying it would be the wrong thing to do. 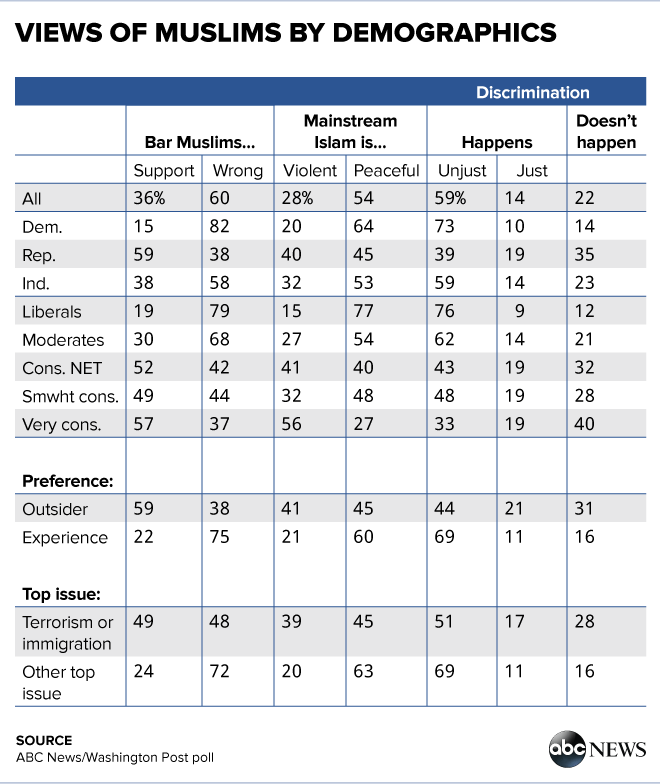 There also are divisions on Trump’s proposal on the basis of age, race, education and religion. Seventy-five percent of young adults, age 18-29, say it’s the wrong thing to do, compared with 53 percent of those age 50 and older. Seventy-three percent of nonwhites say it would be wrong, vs. 54 percent of whites. And criticism of the plan ranges from 73 percent among those with a college degree to 51 percent of those who haven’t gone beyond high school. 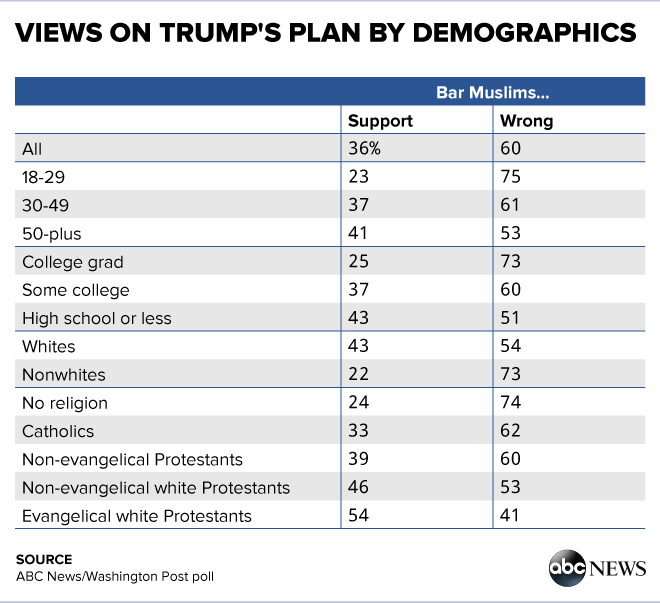 This ABC News/Washington Post poll was conducted by landline and cellular telephone Dec. 10-13, 2015, in English and Spanish, among a random national sample of 1,002 adults. Results have a margin of sampling error of 3.5 points, including the design effect. Partisan divisions are 33-23-34 percent, Democrats-Republicans-independents.

The survey was produced for ABC News by Langer Research Associates of New York, N.Y., with sampling, data collection and tabulation by Abt-SRBI of New York, N.Y. See details on the survey’s methodology here.