Everything You Need to Know About the Zika Virus Outbreak

(ABC News) — Health officials in multiple countries are trying to stop the spread of the mosquito-borne Zika virus, with some countries, such as El Salvador and Brazil, taking drastic measures to combat the outbreak.

Here’s what you need to know about the outbreak that has put health officials around the world on alert.

Where Is the Zika Virus Outbreak Happening?

The virus has until quite recently been reported in Africa, South Asia and Polynesia, but now it’s also being found in Central and South America.

An outbreak of the disease in Brazil lead to an alert by the Pan American Health Organization last May. The U.S. Centers for Disease Control and Prevention have issued a travel alert for 24 countries and territories where the virus transmission is ongoing.

What Does the Virus Do?

The virus has also been associated with a rise of microcephaly birth defect cases. The birth defect is characterized by a malformed or smaller head and brain and can result in serious developmental delays.

The CDC is also investigating if a rare paralysis syndrome called Guillain-Barre is related to the virus. The syndrome is an immunological reaction that can also occur after other viral or bacterial infections.

What Are Countries Doing to Stop It?

In a stunning development in El Salvador, health officials have advised all women of reproductive age to delay pregnancy until 2018 due to concerns about possible birth defects linked to the virus. Earlier this month, El Salvador’s health department disclosed it had found 492 Zika cases.

In Brazil, the government has called in the military to assist with a nationwide push to eradicate the virus. The health minister said that the military and civil defense services would be called in to help health workers combat the virus, which is spread my mosquitoes.

How Is It Transmitted?

The virus is transmitted mainly through the bite of the Aedes aegypti species of mosquito. This is the same type of mosquito that spreads dengue fever. The Aedes albopictus species has also been identified as a potential carrier.

The virus has been found mainly in tropical settings in Africa, Southeast Asia and the Pacific Islands. An outbreak of the disease in Brazil led to an alert by the Pan American Health Organization last May.

While people in the U.S. have been diagnosed with the disease, they have all been travelers who likely got the virus while outside the country. However, the CDC recently reported finding evidence for transmission Puerto Rico.

In rare cases, the disease can be transferred from mother to child during or shortly after birth. There has also been one report of the virus spreading through sexual contact. 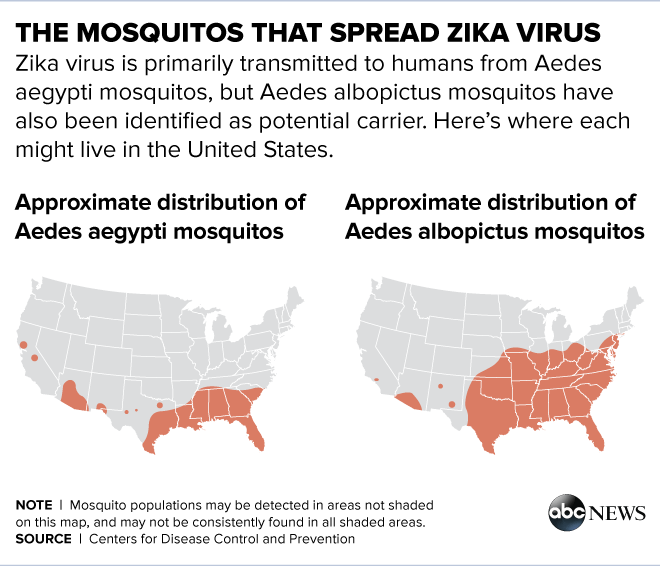 How Is It Treated?

There is no medication or vaccine available to treat or stop the virus. For those who are sickened with the virus, doctors can give supportive care.

There is a treatment for the Guillain-Barre syndrome that helps reverse the temporary paralysis.