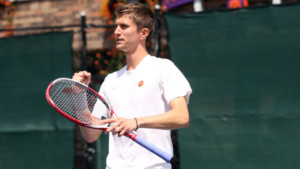 CLEMSON, S.C. – Yannick Maden became the first former Clemson men’s tennis player to play in the Wimbledon Gentlemen’s Singles draw since 1992 on Monday morning, when he squared off against the No. 9-ranked player in the world, John Isner. Maden, from Stuttgart, Germany, fell to the American Isner in three sets, battling tightly against the top-10 opponent, particularly in the second and third sets, at the All-England Lawn Tennis Club in Wimbledon, London, England.

After dropping the first set 2-6, Maden stepped up his play in the second set, trading games with Isner to force tiebreak, which he lost 7-4. In the third set, the two again traded points, until Isner earned a break for a 6-5 lead, and ultimately won 7-5 to decide the match.

Maden, who earned All-America, All-ACC and ACC Scholar-Athlete of the Year honors at Clemson in 2013, became just the fifth former Tiger men’s tennis player to play in the men’s singles main draw at Wimbledon, joining Jay Berger, Mark Dickson, Lawson Duncan and Kent Kinnear. Kinnear was the last former Tiger to compete at Wimbledon, reaching the singles second round in 1992. He also became the first former Clemson men’s tennis player to play in the singles main draw of any Grand Slam in 24 years, as John Sullivan competed in the Australian Open in singles in 1994.

Maden, a three-year letterwinner at Clemson from 2011-13, and Isner, who played collegiate tennis at Georgia, were two of just seven players, out of 64 in the field at the Wimbledon Gentlemen’s Singles draw, to have played college tennis.

“The Clemson Family is so proud of Yannick and his performance at Wimbledon,” said Head Coach John Boetsch. “Yannick was a standout student-athlete here at Clemson and in the ACC. His hard work and tenacity carried over to the pro tour, and his success is much deserved.”