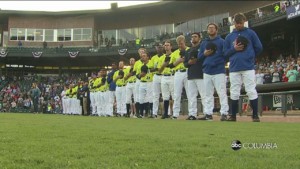 LAKEWOOD, NJ – Fireflies starter Luc Rennie had just hurled six shut-out innings when Zach Rheams stepped to the plate in the top of the seventh inning. Rheams blasted what proved to be the go-ahead two-run home run that delivered Columbia – and Rennie – the win in game one of Monday’s doubleheader against Lakewood. The Fireflies defeated the BlueClaws 2-0 in the opener before falling 12-6 in game two at FirstEnergy Park.

Rheams would then double twice in the second game on Monday. The former Texas Tech slugger has reached base safely in his first five games as a Firefly. Rheams has posted a .357 batting average and .526 on-base percentage in those five games with Columbia (11-13, 45-46) including three runs, four doubles, a homer, three RBI, a pair of walks and he’s been hit three times.

Rennie has been nearly unflappable in two starts with the Fireflies. He did not allow a run in 6.2 innings on the mound Monday. In fact, the San Diego native scattered just three hits. Rennie picked up his first win in affiliated baseball since August 14, 2014 (as a member of the Orioles farm system) and now owns a 1.23 ERA over his first 14.2 IP as a Firefly. Carlos Hernandez recorded the final out of the game to clinch his third save and Columbia’s fifth shut-out victory of the season.

Blake Tiberi not only tallied a pair of hits in the first game, but the second baseman did the same in the night cap. Tiberi has collected 11 hits in the first five games of the road trip and has increased his batting average 20 points (from .245 to .265) since July 11.

Scott Manea caused quite the stir vs. Lakewood (15-9, 56-37) as well in game two. Playing in front of nearly two dozen friends and family members, Manea stroked three hits, one of which a monster 417-foot home run in the seventh frame. It was Manea’s seventh of the season.