KNOXVILLE, TN (WOLO) — Former Dutch Fork running back Bryce Thompson was listed as a co-starter at cornerback this week on Tennessee’s depth chart. 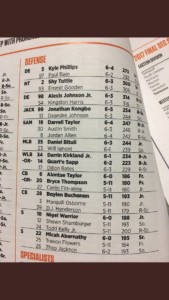 Thompson was a late addition to the Vols signing class. After committing to USC, Thompson was academically ineligible to sign with the Gamecocks, and instead chose Tennessee in late may.

The fifth-ranked prospect out of Irmo played running back for the Silver Foxes, and coach Jeremy Pruitt even hinted at Thompson playing a little offense this season.

“To me, one thing you need to be able to figure out is how to get your best players on the field,” Pruitt said. “When you’ve got 120 guys, you’ve got guys like Bryce and Alontae that have played both sides of the ball. They can play wide receiver, they can play tailback, they can play anywhere in the secondary. So you’re trying to figure out what the best combination is to produce the best team.”