Columbia, SC (WOLO) — The Richland County Sheriff’s Department is hoping you can help them locate a suspect they say is wanted in connection to a theft from a motor vehicle.

Officials say the suspect seen in the photo is accused of breaking into a Hyundai Sonata where the owner of the car says their wallet was stolen with their debit card inside. Authorities say a purchase was made at a Waffle House off Garners Ferry Road where deputies were able to capture a surveillance photos from inside the restaurant with the stolen debit card in his possession to make the alleged purchase.

Authorities are asking anyone with information about the break in or if you recognize the man in these pictures they ask you to call Crimestoppers at 1888-CRIME-SC. If you have information you can remain anonymous and can get a 1,000 dollar reward for information that leads to an arrest. 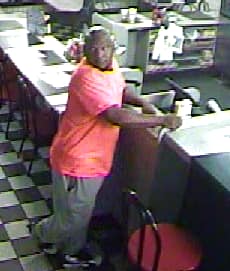