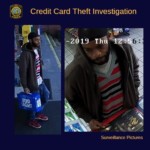 Columbia, SC (WOLO) — The Columbia Police Department is asking the public for help identifying this man accused of stealing a credit card. Authorities say the man pictured here is suspected of using that card at several business to make fraudulent purchases.

According to investigators, the victim reported her card stolen from a Harden street restaurant on January 17th, 2019

Officials say it was until after her card was reported stolen that she noticed nearly $900.00 dollars worth of charges racked up on her credit card. Take a good look at the surveillance images released from police. If you recognize this man you are urged to call Crimiestoppers at 1888-CRIME-SC