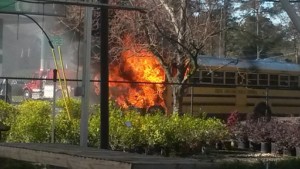 A spokesperson for Richland Dist. 2 says a group of students from an elementary school were heading to a field trip.
Authorities say students, teachers, and chaperones were on the bus when the driver noticed smoke coming from underneath the bus and pulled off Wilson Boulevard.
Officials say at that point, everyone got off the bus.
We’re told the fire started after everyone was off and a safe distance away.

Local Living: Lights Before Christmas, plus Christmas Pop Up