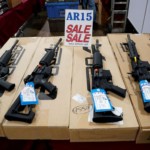 This comes in the wake of the recent terror attack where 50 people were killed at two different Mosques Friday.

The ban includes the gun style used to orchestrate the attacks along with any semi automatic guns or shotguns that are capable of being used with a detachable magazine that holds more than a standard round.

However, the ban does not include semi automatic .22 caliber guns or smaller gun, nor guns commonly used by farmers and hunters.

According to the Prime Minister, they are currently working to develop a formal “buy back” method that could cost up to $200 million New Zealand dollars($140 million USD).

Following Thursday’s announcement  one of New Zealand’s largest gun retailers said that it would support “any government measure to permanently ban such weapons”.

According to the associated press the company will no longer supply any assault style weapon of any category in store and online.

Funeral Services for victims are being held all week long.