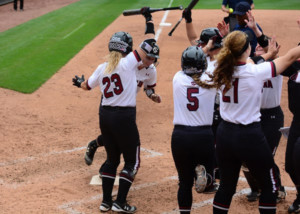 COLUMBIA, S.C. – No. 15 South Carolina softball swept a Saturday doubleheader over UNCG at Carolina Softball Stadium at Beckham Field. The Gamecocks started the day with a 6-3 victory against the Spartans before closing with 9-4 win to earn their 24th-consecutive non-conference victory.

In 14 innings of work, Carolina hit six home runs with 15 runs to improve to 20-5 at home this year and post a perfect 3-0 record on its SEC bye week.

The Gamecocks closed the 2019 regular season with a 27-2 mark in non-conference games and 3-0 record over UNCG on the year.

South Carolina (34-12, 7-10 SEC) faced some adversity in the first game as UNCG scored two runs in the top of the first to take a 2-0 lead through the first inning of action in a game that was postponed from Friday night due to storms in the Columbia area.

Carolina picked up the scoring in the bottom of the second as Karly Heath doubled down the line in right field to plate a run and cut the Spartan (25-18, 11-8 SoCo) lead to 2-1 heading to the third.

Both teams traded a scoreless third while UNCG added a run in the top of the fourth to push the lead to 3-1 before the Gamecock bats came alive in the bottom frame.

Three home runs off the bats of Heath, Jana Johns and Cayla Drotar in the fourth scored four runs to give South Carolina its first lead of the day at 5-3.

Alyssa Kumiyama later homered in the bottom of the fifth to extend the Carolina lead to the 6-3 advantage it wouldn’t surrender.

Dixie Raley (11-3) earned the victory in the circle going all seven innings with just two hits and eight strikeouts.

Heath led the way at the plate going 3-for-3 with a run and two RBI. Drotar had two RBI, as well. Johns, Madison Owensand Kumiyama added hits in the contest.

GAME 2 RECAP
South Carolina continued its scoring ways in the second game of the day to pick up the doubleheader sweep of UNCG.

The two squads held each other scoreless through two innings before the Gamecocks pounced for six runs in the bottom of the third. Jana Johns started it with a double to score two before Alyssa Kumiyama singled home two to make it 4-0 Gamecocks with two outs. Katie Prebble kept the scoring going with a two-run blast, her first at Carolina Softball Stadium, to give Carolina the 6-0 lead through three.

UNCG showed fight, though, with four runs in the top of the fourth to cut the deficit to 6-4 but it would be the only scoring out of the Spartans in the second game of the day.

Carolina tacked on two more runs in the fifth thanks to Prebble and Madison Owens RBI before Karly Heath homered in the bottom of the sixth to give the Gamecocks the eventual 9-4 victory.

Cayla Drotar (10-5) earned the victory in the circle going four innings with four strikeouts. Kelsey Oh came on in relief to finish the game in three innings of action with six strikeouts.